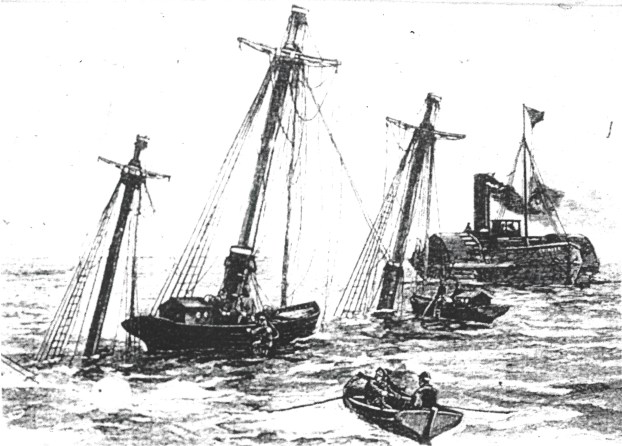 On Jan. 8, 8163, the Steamboat Dan which had been captured by Union forces at Lake Charles, La., would be set on fire one mile north of Sabine Pass Lighthouse burning to the waterline. Union forces jumped overboard and the Dan Steamboat sank with a 30 pound Parrot Gun and a 12 pound howitzer on board. Losing the Steamboat Dan required more naval shipping to be sent to protect Sabine Pass.

The Navy sent the USS Morning light and the schooner Velocity , both mast sail, to patrol the area. General McGruder, the new commander of the Army and Navy, sent the vessels Josiah Bell and Uncle Ben to engage the Union forces at Sabine Pass. While at Orange, cotton bales were loaded on the vessels to protect them from cannon and small fire. These vessels were known as Cotton Clad Steamers. One long range cannon was placed on board the Josiah Bell under the direction of the Davis Guard and Lt. Dick Dowling, who later became famous with 47 Irishman at the Battle of Sabine Pass. The Uncle Ben was loaded with two – 12 pound cannon on field carriage and down the river they headed eagerly for the fight with the Union vessels.

When they were spotted by the Union vessels, they pulled anchor and set sail to run. Immediately out of the pass, they engaged the Union vessels. Numerous 32 pound shells were sent towards the Morning Light, striking her. The main mast of the ship in the center was truck and tumbled to the deck. A 32 pound gun was struck, killing one sailor ad injuring nine others. The black smoke was belching from the Confederate vessels as they closed rank. The Union sailors were unable to man their guns because the confederate soldiers kept the deck of the Morning Light alive with bullets like a bee hive.

Captain Dillingham of the Morning Light realized he could not continue the fight. He had no wind as a way of escape and his only recourse was to surrender.

The sister ship, Velocity, found the same fate and when she saw the Morning Light surrender, she was next in line. This was the first ship to ship engagement in east Texas waters. When efforts were made to bring the USS Morning Light across the bar at Sabine Pass it was thought the Morning Light would stick in the mud and block the pass. Efforts were made to strip gun powder and weapons except for the large 32 pound cannons, which each weighed some 7,500 pounds. When Union forces approached the ship, she was set on fire and burned, sinking some 25 feet of water. The capture of the USS Morning Light and USS Velocity were the first ship to ship engagement causing the Union forces to lose nearly 150 men, 11 pieces of artillery and additional supplies taken from the two ships.

In 1863, Confederate forces would capture some 11 ships and more than 50 cannon, which would assist in the continuance of the war. During the Civil War, in 1863, this was the only time war ships were off the Texas coast. Recent evidence of timber washing up on the beach may be remains of the USS Morning Light. Approximately 17 timbers, some over 18 feet long and 12×12 in size, have surfaced on the beach, which show the ship is breaking up. It would be nice to preserve these items for future research and study, but that is another story. They must be processed through Texas Historical Commission for Preservation.