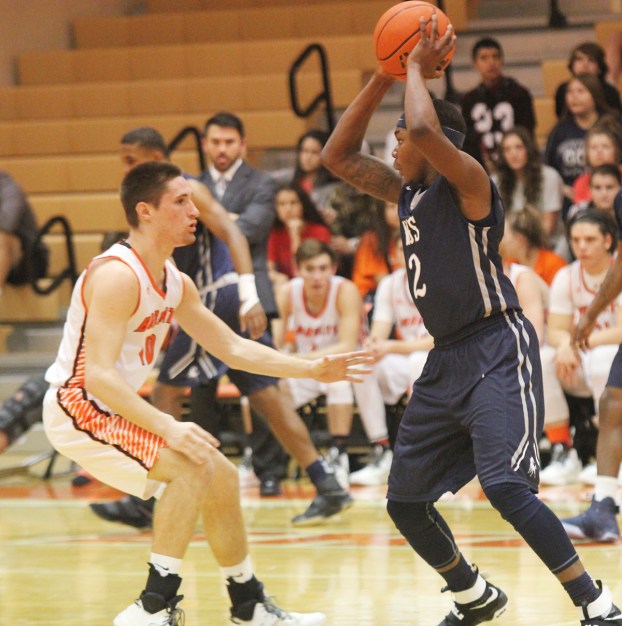 Leader Photo by Van Wade WO-S' Cory Skinner (2) is guarded by Orangefield's Caleb Kress during the first half Friday night at Bobcat Gym.

ORANGEFIELD — Finding the hot hand early, the West Orange-Stark Mustangs never looked back as they improved to 3-0 in District 22-4A play by throttling Orangefield 75-32 at Bobcat Gym Friday night.

Jay’len Mathews got the Mustangs going early as he sank three of his game-high five three-pointers in the first quarter. Mathews finished with a game-high 15 points.

Alex Catt had four points for the Bobcats in the quarter.

Cory Skinner did damage inside for the Mustangs throughout and scored five points in the second quarter. Skinner finished with double-double, scoring 14 points while snagging a game-high 10 rebounds.

Forward Terron Brown scored all seven of his points for the Mustangs in the second quarter and he also finished with seven rebounds.

The Mustangs outrebounded the Bobcats 36-18.

Zach Dischler scored all five of his points for the Bobcats in the second quarter but WO-S still outscored Orangefield 14-9 in the quarter to take a 37-17 lead at the half.

The Mustangs did not let up in the third quarter as their full-court pressure wore down the Bobcats. Orangefield finished with 23 turnovers, 10 of them coming in the third period.

Bretlin White tallied seven of his nine points in the quarter for the Mustangs while Skinner chimed in with six and Tariq Riley five, including a three-pointer from nearly half court to end the third, pushing the WO-S lead to 65-20.

Mandel Turner-King had six boards for the Mustangs while Riley added five.

Both teams struggled from the free-throw line. The Mustangs made 7-of-16 charity shots while the Bobcats converted just 8-of-17.

The Mustangs will visit Class 4A’s top-ranked team in Silsbee on Tuesday while the Bobcats welcome in Bridge City.