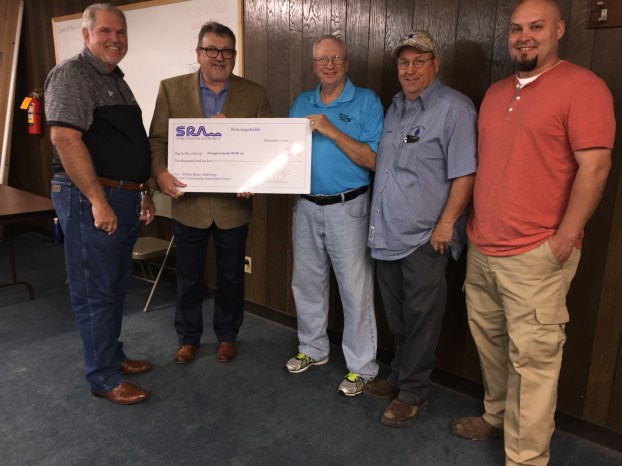 WEST ORANGE — The Sabine River Authority of Texas (SRA) was pleased to award Orange County Water Control and Improvement District #2 (OCWCID #2) a Community Assistance Program Grant on January 17th as part of SRA’s Fiscal Year 2017 Economic Development Initiative. The $10,000 check will be used to leverage local funds to remove and replace OCWCID #2’s wastewater treatment system east clarifier effluent weir to meet TCEQ requirements. David Montagne, SRA’s Executive Vice-President and General Manager, in a letter to OCWCID #2, wrote “OCWCID #2’s project to remove and replace its east clarifier effluent weir to meet TCEQ requirements is an initiative that SRA supports in its efforts to improve water and wastewater systems throughout the basin” and “SRA looks forward to working with OCWCID #2 in the future as we continue to focus on increasing the economic vitality of the Sabine River Basin”

Funds provided for the Community Assistance Grant Program must fall within four project categories, which include 1) Water Supply; 2) Wastewater Management; 3) Water Conservation; and 4) Water Quality and are limited to $10,000 per project.

Funds for the grant for OCWCID #2 were approved by SRA’s Board of Directors in December 2016.

In order to be eligible for the Community Assistance Program, applicants should be a governmental entity, district, or a non-profit, member-owned water supply corporation or sewer service corporation and located within the Sabine River Basin of Texas. Water resource projects should be consistent with the statutory mission of SRA. Created as a conservation and reclamation district in 1949, responsibilities of the SRA are to control, store, preserve and distribute the waters of the Sabine River and its tributary system for useful purposes.

The Sabine River Basin covers a large portion of East Texas with a population of over 551,000 in all or part of 21 counties according to U.S. 2010 Census figures. A large portion of that area is rural in nature.

WO Council has concerns of a hospital district