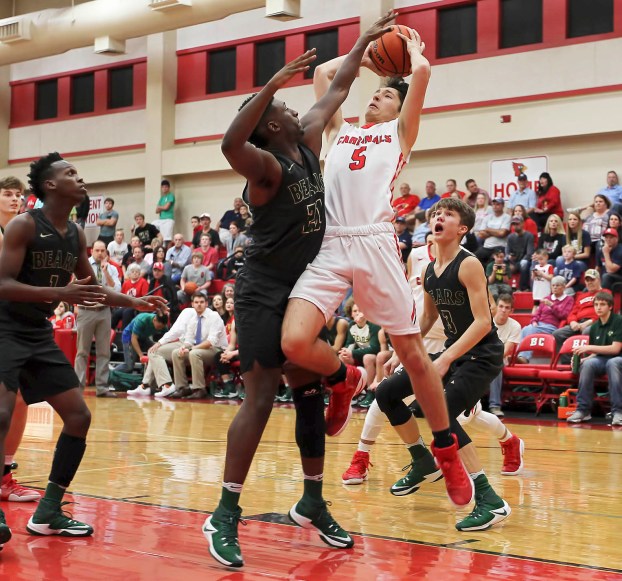 BRIDGE CITY — Fans certainly got a treat Friday night at Cardinal Gym in the District 22-4A opener between the visiting Little Cypress-Mauriceville Bears and the Bridge City Cardinals.

Both teams battled hard in a game that saw both teams produce nice surges. However, it was the Bears that had the final answers as LC-M snagged a 50-45 victory.

Bridge City trailed 19-17 at intermission but opened the third quarter with a 9-0 run to go up 26-19 as Baker and Brandon Vela were hot and the two combined for 12 third quarter points.

That’s when LC-M literally caught fire from the three-point line. The Bears sank six three-pointers in about a five-minute span to take a 38-31 lead heading to the fourth.

Keegan Sonnier roped two treys back to back and then Simmons canned one. Braden Bridges really caught fire, hitting three bombs on three consecutive trips to help give the Bears the seven-point edge going to the fourth.

The Cardinals continued to battle and eventually took the lead with tough defense and Vela and Baker each connected on three-point shots to give the Cardinals a 41-40 lead before the Bears buckled down on the defensive end.

Simmons and Bridges paced the Bears with 11 points apiece. Provost chimed in with eight points and 11 rebounds while Katon Brown contributed eight points and nine boards while Sonnier finished with six points.

Baker led the Cardinal arsenal with 15 points. Vela had a big night again from his point guard spot, finishing with a double-double with 14 points and 11 rebounds. Cardinal post Hunter Wiegreffe had six points. Justyn Romero had nine rebounds for the Cardinals, who outrebounded the Bears 33-27.

Both teams protected the ball well especially LC-M. The Bears finished with just five turnovers while the Cardinals had 12.

The Bears will return home Tuesday to take on Orangefield while the Cardinals will make a trek to West Orange-Stark.

By Caleb Adams Leader Correspondent WEST ORANGE — The West Orange-Stark Mustangs had no problems in their District 22-4A... read more