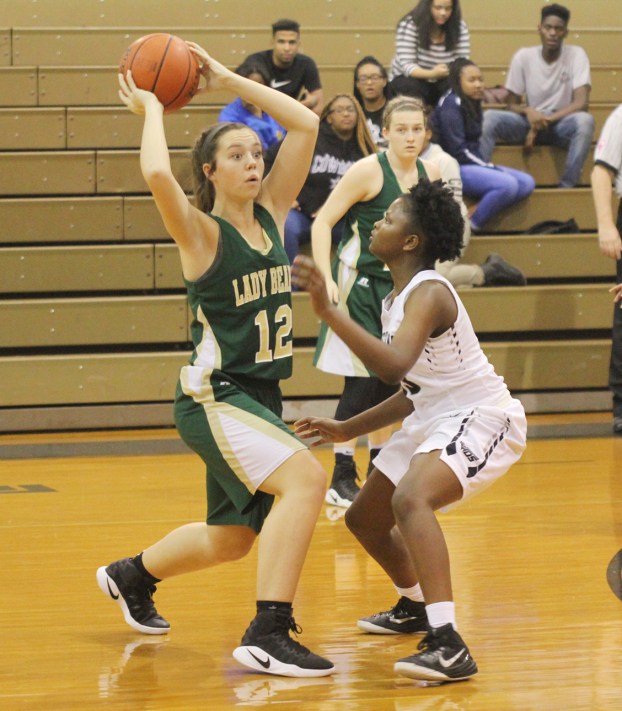 Leader Photo by Van Wade LC-M's Alyssa McKellar (12) looks to get the ball to a teammate as WO-S' Ke'shaunia Winbush defends Tuesday night.

WEST ORANGE — Getting a pair of big wins on the road to start District 22-4A play, the Little Cypress-Mauriceville Lady Bears are off to a 2-0 district start as they took down the scrappy West Orange-Stark Lady Mustangs 49-41 at Mustang Gym Tuesday night.

The Lady Bears led throughout most of the game as they would build a six to eight-point lead only to see the Lady Mustangs (0-2) in district strike back to get close.

Lady Mustang Anah O’Neal, who finished with a game-high 23 points, was able to get WO-S to within 35-34 with a bucket with 6:10 remaining.

However, the Lady Bears regrouped, finishing the game with a 14-7 spurt that was sparked by Jacie Miller. Miller, who had 15 points, scored six of her points down the stretch.

Lady Bear post Alyssa McKellar, who has been known for her double-doubles this season, notched another one as she led the Lady Bears with 17 points and 10 rebounds.

The Lady Bears jumped out to an 8-1 lead and led 13-9 at the end of the first period. Miller and McKellar combined for nine points while O’Neal had four for WO-S.

LC-M stretched its lead to 24-18 at intermission. McKellar bruised her way inside for seven points in the quarter while O’Neal had five points for WO-S.

The free-throw line was a detriment for the Lady Mustangs throughout. WO-S was just 2-for-10 from the line in the first half and finished the night 6-of-19.

LC-M converted 14 out of 22 of their charity shots.

The Lady Mustangs, however, kept battling and actually took the lead at 29-28 with 2:28 remaining in the third behind a bucket by Brown.

The Lady Bears quickly answered with the quarter’s last seven points and a Renna Toomey layup made it 35-29.

The Lady Bears turned up the defensive heat, forcing WO-S into six late turnovers and then put the game away from the line. Miller and McKellar combined to go 6-of-8 from the free-throw line in the last six minutes.

O’Neal scored 10 of her points in the fourth quarter and finished with three three-pointers for the Lady Mustangs. She also had four rebounds.

Lady Bears snagged their District 22-4A opener last Friday night as they went on the road to edge past the Hamshire-Fannett Lady Longhorns 52-49.

The Lady Bears received a huge double-double from McKellar, who poured in 16 points while collecting a whopping 19 rebounds.

Miller chimed in with 14 points to go along with six boards while Perry pitched in with 13 points.

The Lady Mustangs dropped a 66-21 road decision at Silsbee in their 22-4A opener.

The Lady Bears will play host to Bridge City Friday while the Lady Mustangs head to Hamshire-Fannett.

LITTLE CYPRESS — The Little Cypress-Mauriceville Bears closed out their non-district with some flair Tuesday night at The Bear Cave... read more