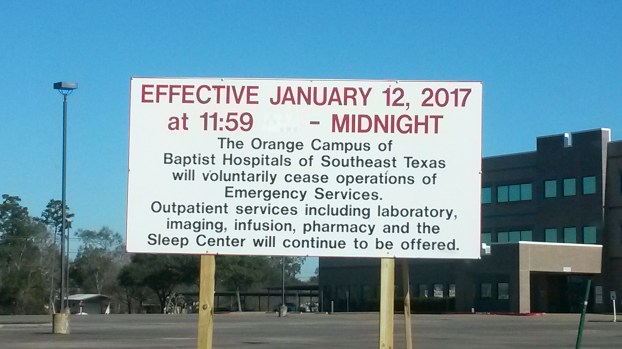 A warning sign now sits at the Baptist Hospital in Orange. Orange county community leaders met Friday  to discuss the future of the county’s health care. This meeting comes before the Baptist Hospital Emergency room will close on January 12.
To resolve this problem, leaders discussed creating a new hospital and district to serve the community.
“The closing of the Baptist Emergency Room is really what accelerated our time frame now,” Orange County Judge Stephen Brint Carlton said. “We have no time to wait on anybody else and that’s why we want to be proactive and do this on our own.”
Judge Carlton wants the hospital district to be separate from the county with its own board. He said the board will make decisions about building a new hospital.

Carlton also said he plans on writing the legislation as soon as possible.

“We are working very hard to get this to the voters to make sure they have an opportunity to make a choice on their own,” Carlton said.

While this legislation is in the works, Carlton wants residents to know that they can go to urgent care centers like Neighbors and Golden Triangle Emergency Center without getting turned away.
Executive Director, Dena Gray Hughes with the Triangle Area Network said the center is available to help out but said she is still worried about the Emergency Room closing.
“We rely on the emergency room services for very critical people who come in for care and services so with the elimination of this, it does put all of us in a very severe situation because we are dealing with health,” Hughes said.
Carlton said during emergencies, ambulances will be taking patients to Beaumont or Port Arthur hospitals. Carlton also said he hopes the Hospital District would create a hospital at the center of the county. The estimated  project for building a new hospital could cost to up to 59 million dollars. However, Carlton said that would be up to the hospital district to decide if it is established.