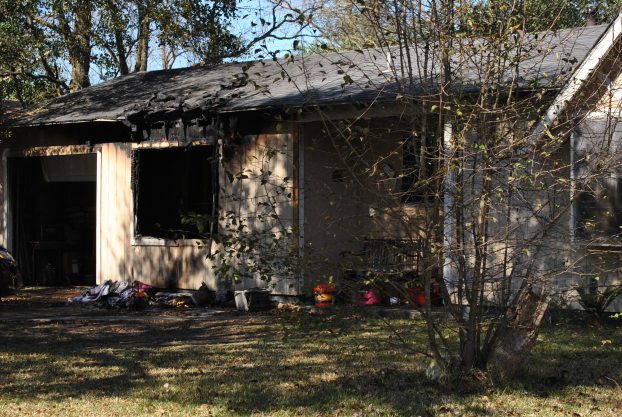 Family of five displaced by fire

A family of five is grateful to be alive after a fire took over their home injuring a 1-year-old baby.

The fire started a little after 1 a.m. Saturday morning at the home in 3600 block of Ridgemont Drive in Orange.

The first fire engine on scene advised there was flames and heavy smoke shooting out of the front living room window. Acadian ambulance received a second call in reference to a burn victim. When fire personal arrived they found the house to be empty and no burn victim. The family was located by Acadian Ambulance at the residence across the street.

With temperatures around 30 degrees, neighbor Donna Compton opened her doors to the family. Compton says she heard nothing but screaming and saw black smoke, so she knew her neighbors were in trouble.

“I just grabbed them and brought them inside of my house and continued to talk to 911 Operator as they were just hysterical,” Compton said. “I just did what anybody would do, and I’m going to help them out as much as I can.”

The family was checked out by Acadian ambulance and it was determined the 1- year old baby girl suffered 2nddegree burns to her legs while her mother was attempting to grab her out of the house.

“I hurried up and grabbed the baby, got quickly out the house and I called my mom and my dad, so they can get out of the house as well,” Karen Williams, mother of the child, said.

The baby was transported by Acadian to St Elizabeth hospital for the burns. The other four occupants were transported as well for smoke inhalations. The fire was contained around 1:55 a.m. according to fire personal on scene.

The fire appears to may have been started by two space heaters in the front living room. The fire then spread to the kitchen and garage area before being tapped out. The rest of the house suffered major water and smoke damage.

The City of Orange Fire Marshal John Bilbo was called to the scene for an investigation.

“It’s a good thing to remind people about the importance of heater safety this time of year,” Bilbo said.

“That’s the scariest thing you can have with kids,” the grandmother Ella Williams explains.

Help is something the family will need more, now that they’re left without a home, but they’re offering their own experience as a lesson for others.

The family was also displaced by hurricane Katrina back in 2005 and has been living in Orange every since. Now after losing everything the family is in need of any clothes or food that may be donated. The family ranges in sizes from a female girl 12-18 months, 2T Boy clothes and size 9 shoes. 12 year old boy wearing a size 38 in pants, large shirt, and size 9 shoes. Adult female size 10 pants, 8 shoes, and adult female 4X Shirt, 11 shoes, and 28 wide skirts.