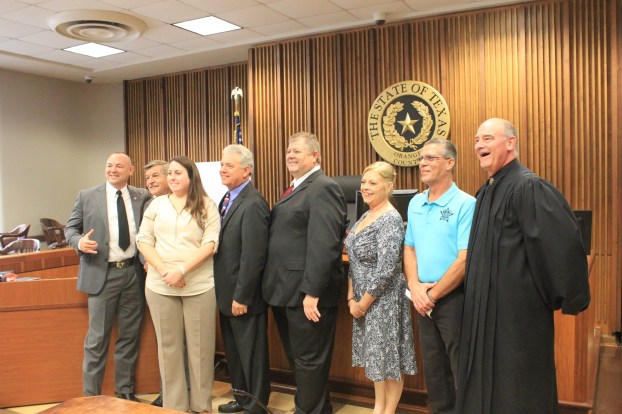 Elected officials are sworn in Sunday

Friends, family and citizens filled the 128th District Courtroom on the 2nd floor of the Courthouse located at 801 Division in Orange to witness elected officials take their oath for office.

Orange County Sheriff Keith Merritt announced after taking oath, this will be his final four years as Sheriff.

“This will be my last four years,” Merritt said. “It is time to move on.”

Merritt also expressed gratitude to the staff and employees of the Sheriff’s office for their support.

“I want to thank all the citizens for their faith in me,” Merritt said. “I am very pleased and thank you for the support for the staff and employees of the Sheriff’s Office.”

Merritt has worked in law enforcement since 1979.

Orange County Commissioner Pct. 1 Johnny Trahan was sworn in with his wife Becky, by his side.

“I understand this is a great responsibility,” Trahan said. “I am looking forward to the new year and new opportunities.”

Orange County Commissioner Pct. 3 John Gothia joked about his speech would be short because he is a Dallas Cowboys fan. The game was on as the ceremony was conducted.

“I am here today because of family and friends,” Gothia said. “I want to make Orange County a better place. It is already a great place but we can always make it better.”

“I thank God for putting me where I am today,” Fisher said. “God, family and citizens.”

Constable Pct. 4 Lane Mooney was sworn in with his wife, Michelle, by his side.

“I want to thank my wife,” Mooney said. “I could not do it without her. She is my guiding light. I also want to thank the citizens.”

Constable Pct. 3 Mark Philpott was sworn in by his wife, Babette. Philpott is in his 22nd year in law enforcement and is starting his third term as Constable.

“This office is the citizen’s office, not my office,” Philpott said. “I work precinct three and all over Orange County.”

Justice of the Peace Hershel Stagner Jr. will be sworn in on Wednesday morning. Stagner could not officially take oath until after Judge David Peck retired. Stagner was appointed Justice of the Peace by the commissioners after Peck announced last month of his intentions to retire.

Constable Precinct 1 Chris Humble will be sworn in at a future date.

Bridge City Chamber of Commerce December Business of the Month

The Bridge City Chamber of Commerce announced Fabricating Solutions, LLC has been named Member of the Month for December 2016.... read more