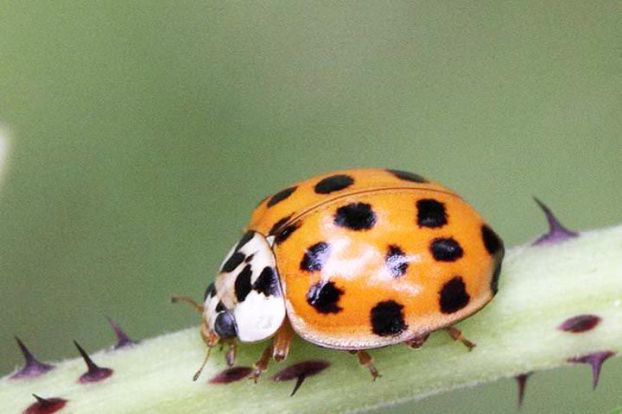 Courtesy photo Asian ladybeetle, an invasive species, is displacing many native ladybugs in Texas and Louisiana.

An invasive insect species could be making itself at home in your house, and an LSU AgCenter entomologist says the unwelcome guest is the variegated Asian ladybeetle.

“It is not a native species,” LSU AgCenter entomologist Chris Carlton said. “In Louisiana, we have at least 75 species of ladybugs, and most are native.”

This particular ladybug came to Louisiana in 1988, possibly from a shipping container.

“No one really knows how it got here,” he said.

By the early 1990s, Carlton said, the species was found throughout the U.S., and it displaced many native ladybugs.

The invasive species has 30-40 different color variations, with and without spots.

Most ladybugs prefer natural habitats, but this one prefers man-made structures for overwintering shelter, he said.

So far, efforts to predict the ladybug populations have been futile.

“We have an extremely hard time predicting numbers of insects from one year to the next,” Carlton said.

And the occurrence is spotty. Carlton said he’s only seen one in his house in Baton Rouge, but he came upon thousands north of Baton Rouge, Lafayette, lake Charles and Texas.

The insect can bite, although it has no stinger or venom. They bite using sharp mouth parts that are used to pierce the skin of aphids, their preferred prey.

The ladybugs are active in winter during warm spells and are adapted to cold winters.

Houses can be protected against the insects by sealing homes, Carlton said, but he can’t recommend any chemical treatments.

Smashing the insects usually results in an unpleasant odor. Pest control companies could spray for the insect, but it’s probably not justifiable.

The Bridge City Chamber of Commerce is pleased to announce that the December Student of the Month for Bridge City... read more