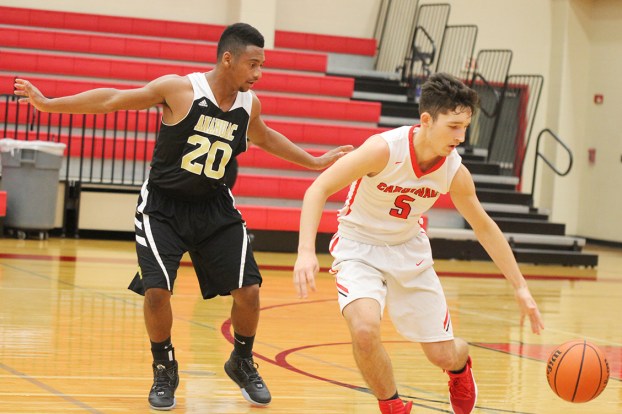 The Bridge City Cardinals will remember the shot forever while the Port Neches-Groves will have a tough couple nights dreaming about it.

The Cardinal post ripped a three-point bomb from just beyond the key at the buzzer Thursday as the Cardinals captured the Championship of their own Cardinal Classic 46-43 over the Indians.

The Cardinals (11-6) almost saw the game slip away. BC held a 35-24 lead heading into the fourth quarter before the Indians scrapped back to tie it with 10 seconds left on a rebound and putback by Haden Wiggins.

Justin Romero had eight points and six rebounds for the Cardinals. Zack Honeycutt chimed in with eight points while Brandon Vela had six.

Wiggins led the PN-G arsenal with 13 points and nine rebounds.

Guard Derrick Papa had 12 points for the Indians before fouling out early in the fourth quarter. Keynel McZeal had seven points and seven rebounds while Hunter Curtis finished with seven points and six boards.

The Indians controlled the glass, outrebounding the smaller Cardinals 36-19. However, BC was much better from the free-throw line, going 13-of-21 while the Indians went just 12-of-27.

Both teams protected the ball well. PN-G had 11 turnovers while BC finished with just eight.

The Vidor Pirates held on to take the third-place trophy as they nipped Tarkington 44-42 in overtime.

The Cardinals got past a scrappy Tarkington team 57-47 in an early Thursday morning game to advance to the championship.

The Cardinals led by as much as 54-38 before the Longhorns trimmed it to 54-47 with a little over a minute left.

BC guard Max Baker was a thorn in Tarkington’s side throughout with tenacious defense that turned into plenty of layups.

Baker led the Cardinals with 17 points.

The Cardinals finished with a 22-20 rebounding edge. Tarkington had 20 turnovers while the Cardinals had 18. BC went 14-of-21 from the free-throw line while the Longhorns were 7-of-9.

The Orangefield Bobcats snagged a 82-50 victory over Sabine Pass. Caleb Kress, who had the hot hand throughout the tourney, led the Bobcats with 23 points.

Payton Lathrop and Aven Lathrop scored 11 points apiece while Alex Catt and Dylan Williams chimed in with eight points each.

Orangefield dropped a 44-41 decision to Vidor in its first game Thursday.

It was smooth sailing for the Bridge City Cardinals in their own Cardinal Classic Wednesday while the Orangefield Bobcats dropped a pair of tough games at Bridge City High School and Middle School on the first day of the tournament.

The Cardinals cruised past the Anahuac Panthers 62-47 in their first game of the day and then hammered the Sabine Pass Sharks 79-38.

Bridge City, along with Evadale and Tarkington, each won their two games on the first day.

The Bobcats, meanwhile, dropped a 72-66 tilt to the Evadale Rebels in their first matchup of the day and then dropped a 42-41 heartbreaker to the Port Neches-Groves Indians in their second game.

The Cardinals were clicking on all cylinders to blow past the Sharks. The two played almost two weeks ago with the Cardinals squeezing out a 50-47 decision. However, the Cardinals controlled it from the start Wednesday, going on a 22-9 run to start the game and they stretched it to 49-20 at intermission as they never looked back.

Every Redbird was involved in the onslaught.

Both guard Brandon Vela and post Benjamin Moore each contributed double-doubles. Vela had 12 points and collected 10 boards while Moore filtered in 10 points and snagged 12 rebounds.

The Cardinals controlled the glass, finishing with a 47-25 rebounding edge. BC finished 17-of-27 from the free-throw line while the Sharks went just 6-of-13.

Anahuac played the pest role for the first half in the Cardinals’ victory as BC held just a 24-18 advantage at intermission.

Behind the strong effort in the second half, especially by Romero inside, the Cardinals were able to pull away with a 17-7 jaunt in the fourth quarter.

Chuck Boles led Anahuac with 14 points while Ben Richardson had 10.

The Bobcats scrapped with the feisty Rebels in their first game but turnovers proved to be too costly as the Bobcats committed 29 of them.

Caleb Kress, who had a superb all-around day, led the Bobcats with 20 points while also grabbing nine rebounds to pace four Bobcats in double figures.

Payton Lathrop chimed in with 15 points and seven boards. Aven Lathrop had 14 points while forward Alex Catt had a double-double with 12 points and 10 rebounds.

Daniel Bean led the Rebels with 21 points as he connected on five three-point bombs. Guard Brady Griffin had 19 points while Jonathan Gravis contributed 11.

The Bobcats finished with a 41-26 rebounding edge. Orangefield was 15-of-25 from the free-throw line while the Rebels were just 8-of-18. Evadale had just 15 turnovers.

PN-G forward Haden Wiggins was fouled with 0.3 seconds left with the game tied at 41-41. His first free-throw fell short but he was able to convert the second one as the Indians walked away with the victory.

Kress led the way for the Bobcats, scoring a game-high 21 points while Katt added 11. Zach Dischler and Blake Bradley led the Bobcats with five rebounds apiece.

In other action at the tourney Wednesday, Tarkington defeated Sabine Pass 63-61 and Anahuac 75-34. Evadale defeated Vidor 77-67 and Vidor toppled PN-G 46-34.

The rest of the games will be at the HS Gym.

BC snags a pair of wins at Cardinal Classic

BRIDGE CITY – It was smooth sailing for the Bridge City Cardinals in their own Cardinal Classic Wednesday while the... read more