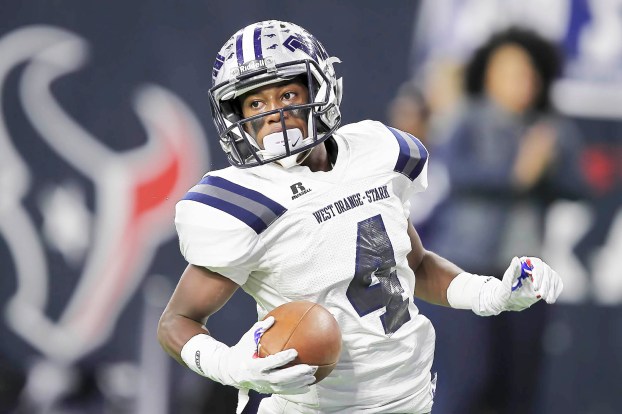 When local football fans look back upon the 2016 season there will certainly be plenty of memories.

West Orange-Stark, Bridge City, Little Cypress-Mauriceville and Orangefield each made the postseason.

Of course, fans of the team in Blue and White have become spoiled as WO-S rolled to a perfect 16-0 as the Mustangs captured their second consecutive Class 4A Division II State Title and third straight trip to the State Championship.

All the Mustangs accomplished was outscoring the opposition by a 811-69 count to go along with eight shutouts in what was one of the best performances in Texas high school football history.

The Bridge City Cardinals soared their way to a District 10-4A Division I crown despite many naysayers before the season predicting the Cardinals as low as third and fourth.

The Cardinals zipped through 10-4A play and downed Silsbee for the 10-4A title in one of the most dramatic games of the season. Bridge City then zipped to the third round of the playoffs.

The LC-M Bears notched third-place in a rugged 10-4A while the Orangefield Bobcats found themselves in the playoffs by finishing in a three-way tie for second in 12-4A Division II.

The Bears and the Bobcats had the most thrilling game of the season when they met in non-district action at Battlin’ Bear Stadium with LC-M coming out victorious in a 43-42 overtime encounter.

Of course, all great football seasons must come to an end and another strong one will start next season as all four of our teams will be going through a youth movement in 2017.

So, we can now wrap up the year with the 2016 All-Orange Leader Football Team as so many players deserve accolades for producing a tremendous season.

Before getting to “The Team” special thanks need to go out to a wonderful crew that had every single game covered this year.

Correspondent writers Caleb Adams and Ronnie Hughes were on hand to put together excellent stories each Friday night.

Then there were our photographers in Mark Pachuca and Joey Dupuy, who brought us excellent game shots and fan shots throughout the season. I would stack their work with anybody and that duo would come out on top.

So, without further ado, here is the 2016 All-Orange Leader Team:

MOST VALUABLE PLAYER: KJ MILLER, WO-S: Catch him if you can. That was the scouting report for opposing coaches each week in trying to contain Mr. Kentavious Miller and they still couldn’t do it. Miller simply did it all for the Mustangs in his senior season, accounting for 21 touchdowns in the state title run. The biggest question is what Miller did not do and good luck with that. Miller led the Mustangs with 37 receptions for 767 yards and 13 touchdowns. He carried the ball 19 times for 207 yards and a score. He shredded opposing special teams in the return game to electrify the Mustang faithful. He had 22 punt returns for 576 yards and five TDs and had two kickoff returns for 118 yards and a score. He was the holder on all of the WO-S extra-point and field goal attempts. He punted 27 times for a 33.3-yard average. He was also inserted a lot on defense as well, especially in the playoffs and made some key stops. And how about some icing, he completed 2-of-2 passes for 79 yards and yes, a TD. Now Miller will take his talents to the basketball courts and the baseball diamonds, where he has also earned All-District honors. 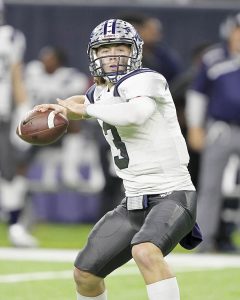 OFFENSIVE MVP: JACK DALLAS, WO-S: Dallas will certainly go down in Orange County lore after helping guide the Mustangs to three straight trips to State Championship Game. His numbers, well, they will be hard to be broken to say the least but it has been his intangibles that really set him apart. It would be hard to find more of a true leader than No. 3. As a senior, Dallas completed 142-of-239 passes for 2,402 yards with 38 TDs and just eight interceptions. Those numbers would’ve been much higher as well if the Mustang staff didn’t call off the dogs early in the second half of most of their games. Dallas wraps up an amazing run as the three-year starter, completing 519-of-850 passes for 7,872 yards with 107 TDs and only 23 interceptions. 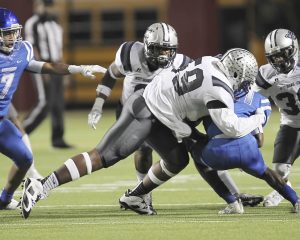 DEFENSIVE MVP: MORRIS JOSEPH, WO-S: In a cast of many that could be sitting in this spot, “Big Mo” was such a force for the Mustang Chain Gang Defense that simply did not let opponents breathe. Joseph was a catalyst for a defense that stymied opponents at every turn. The Mustang defense limited opponents to just 125.4 yards a game and it also included eight shutouts and opposing offense did not find the end zone in 10 of 16 games. Joseph finished with 156 total tackles, 26 for losses. He forced a fumble and also piled up nine sacks. WO-S opponents only averaged 2.3 yards per rushing attempt and completed just 33.8 percent of their passes. 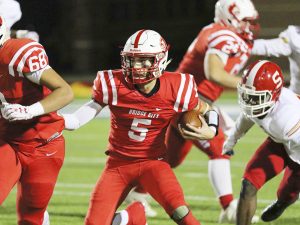 NEWCOMER OF THE YEAR: MAX BAKER, BRIDGE CITY: Baker was a part of a four-headed monster in the Cardinal backfield that included fellow backs Cayce Draper and Patrick Morris along with quarterback Byron Trahan that chewed up a slew of yardage behind a powerful offensive line that mowed down opponents. The touches were certainly spread out as the Cardinals kept opposing defenses on their toes. The Cardinals piled up more than 400 yards a game and Baker, a junior, played a huge role in getting critical breakaway gains in helping Bridge City snag the District 10-4A Division II title and a trip to the third round of the postseason. Baker toted the ball just 86 times but piled up 927 yards, averaging 10.8 yards per carry. He was also solid returning kickoffs as well. 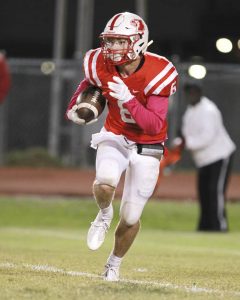 UTILITY PLAYER: HUNTER DENTON, BRIDGE CITY: Opponents had a tough time controlling the speedster in all phases of the game as Denton, a junior, rarely left the field. He will certainly be remembered for hauling in the game-winning touchdown pass from Trahan in the Cardinals’ 10-4A clinching victory over the Silsbee Tigers as he utilized his blazing track speed throughout the campaign. He carried the ball 29 times for 387 yards and six TDs and had the big receiving TD. He averaged nearly 30 yards per kickoff return and brought two home for scores, including a 100-yarder. On defense, he posted 58 tackles, 34 assists, forced five fumbles with three recoveries. He also had two interceptions, bringing one back to the house. 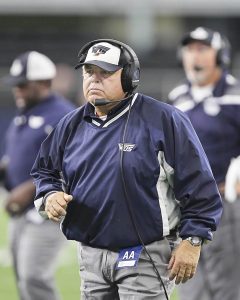 COACH OF THE YEAR: CORNEL THOMPSON, WO-S: Coach Thompson has led the WO-S program to two back-to-back State Championships and a 31-1 record in that span. After a tremendous run as an assistant coach for dominant WO-S campaigns, Thompson has upped the ante since becoming head coach for the Mustangs. In six years he has posted a 78-11 overall record for a .876 winning percentage, which is by far the best in the Southeast Texas coaching ranks. He has notched a 26-4 playoff mark (.867). The Mustangs have claimed six straight district titles under his guidance along with six consecutive trips to at least the Region III Finals.

Here is the 2016 All-Orange Leader Football Team as selected by the Leader sports staff: