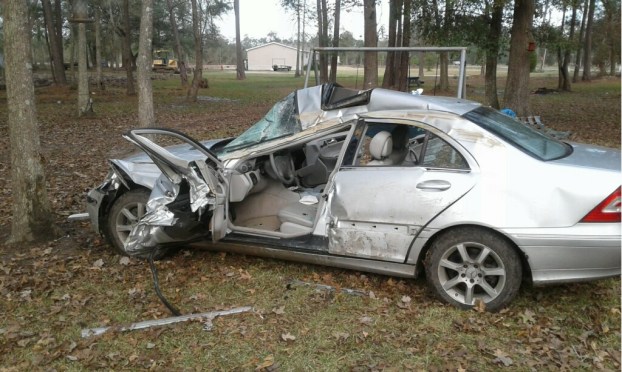 Eric Williams/The Orange Leader A teenager was transported to the hospital after a wreck on Wednesday.

One injured in wreck in Mauriceville

Shortly after 8 a.m. on Wednesday, the Orange County Sheriff’s Office received a 911 call in reference to a major wreck in the 6100 block of Broussard Circle in Mauriceville.

Once fire Personnel arrived on scene they found a teen male trapped inside of a Mercedes Benz that had driven off the road, after hitting the back of a tractor that was on the road doing construction by a construction crew, according to Jacob LeBlanc of Orange County ESD 4.

After hitting the tractor, the car went through a backyard and hit a tree.

The driver had to be extricated out of the car by the jaws of life but appeared to be in stable condition. The driver complained that he had been in and out of consciousness but had no severe pains or injuries.

He was transported by Acadian Ambulance to St. Elizabeth Hospital for observation.

By Eric Williams The Orange Leader One person is in custody following an early morning police chase that started in... read more