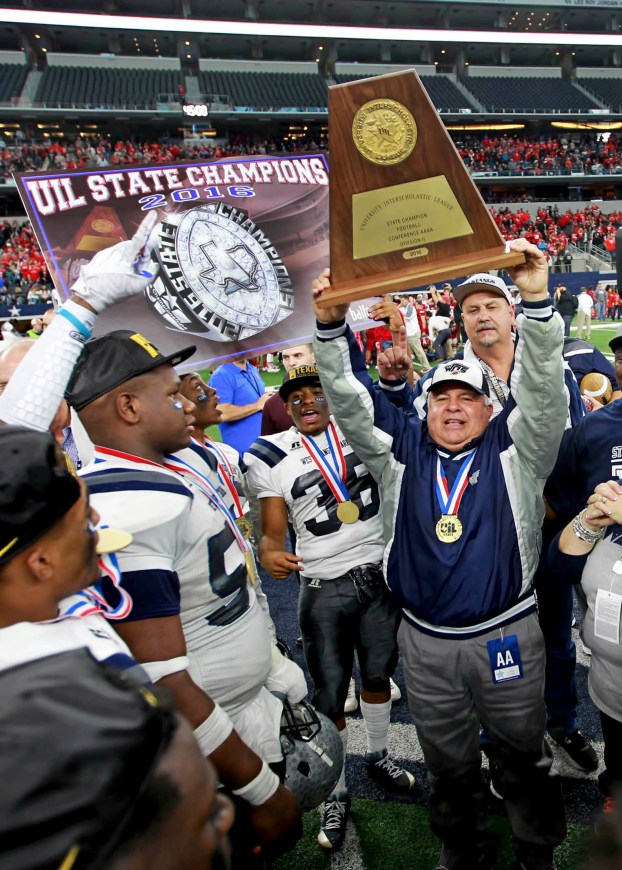 Get out the paint and color the town Blue.

After having the pleasure of covering Mustang Football now for 24 years, I‘ve been on hand for many accomplishments.

Being a college chump from 1986-88, I witnessed from the stands how dominant a program can be.

To be on the inside the last three years though, simply was an amazing journey to say the least. Three straight trips to the State Championship Game and the Mustangs walk away with two titles. Can’t beat that with a stick!

But the ultimate moment came last Friday when the Mustangs hoisted that Championship Trophy high above their hands, declaring themselves champions.

The emotions were certainly running high. There were plenty of happy tears streaming down the faces of players, coaches and family members. They realized how much effort it took just to reach the floor where the Dallas Cowboys call home. They remembered the dog days of August in the sweltering heat plus how they went right back to work last January, pounding away in the weight room, already with a REPEAT on their minds.

The crowd support was tremendous. AT&T Stadium was rocking with a huge “Blue” tint to it and the Mustang faithful was as loud as I’ve ever heard it.

When the Mustangs ran out of that tunnel, there was certainly a sense of Orange County pride. I just wanted to stand up and shout but had to remain silent and professional in the press box.

This year’s version of the Mustangs was quite different then the year before.

However, with a blue-collar working style, they simply proved the naysayers wrong as they stormed through 15 of 16 opponents and capped it with a 22-3 spanking of Celina in the title tilt.

This year, a complete different story.

This group of Mustangs had plenty of experience returning and a big mark on their backs as every team was after their hide. However, it was the WO-S opponents that got scalped, week-in and week-out, by the tune of 811-69.

That’s the point differential for one of the most dominant teams in Texas high school football history.

Just imagine how much more it could have been if Coach Cornel Thompson wasn’t so “SWEET” and had not called off the dogs in so many of those blowout victories as opponents were directed to muddy “WATER.”

After outscoring their District 12-4A Division II opponents 222-7, the Mustangs went on to outscore their playoff opponents 290-39.

This year’s version of the Chain Gang definitely brought flashbacks for me from those devastating 1987 and 2000 defensive units.

The 2016 defense came up with eight shutouts, just one short of the school-record of 1987. They held opposing offenses out of the end zone in 10 games. Opponents scored just eight offensive TDs the entire campaign.

They allowed a mere 125.4 yards a game. Opponents averaged just 2.3 yards a carry and quarterbacks completed just 33.8 percent of their passes for 18 interceptions. OUCH! Then those were those infectious smiles from the likes of Mandel Turner-King, Morris Joseph, Justin Brown and Co. They would put forth the licks and immediately get ready for the next ones.

And how about Turner-King. The “man” lined up at noseguard for 62 games. Folks, that’s nearly equals four NFL seasons.

All year on offense, the Mustangs were as cool as cucumbers, pouncing on opponents early and often led by “The Sherriff” Jack Dallas at quarterback.

Just imagine the scrapbooks that young man will have after his tremendous leadership was so key in three state trips.

The numbers don’t lie and we all know they could’ve been even higher, but why hang 80 points on people when you already have 60.

We’ll always remember the explosiveness of receivers KJ Miller and Keon Hancock and the steady runs of back Jeremiah Shaw. And then there is always the play of an unsung offensive line that always seemed to make strides week after week.

I couldn’t be happier for long-time coach Cornel Thompson. I’ve known that man since I broke away from my training wheels on my bicycle and here I stand, at age 50, celebrating back-to-back titles with the man simply known as “Coach T.”

After serving as the defensive coordinator for lengendary coach Dan Hooks for years on top of years, Thompson has certainly not disappointed in his six-year run as the head man.

During that span, the Mustangs have went 78-11 (.876 winning percentage) overall and 26-4 in the playoffs (.867). Of course, included in the three straight trips to state are six straight district titles and six straight visits to the 4A Region III Championship.

I’m telling ya’ll, you poke that man hard, he will certainly bleed blue.

I know the cupboard is far from bare next year because the Mustangs do have some key players back plus players from a district champion JV squad.

Can’t wait to see those guys perform next year.

Thanks definitely go out to a program that carried an “old” sportswriter on the best journey ever.

You did it all, utilizing such great abilities and most of all, class.

Your coaches understand that and the Southeast Texas region realizes that.

Congrats on bringing it back home to Fruit City once again!

Here is the All-District 12-4A Division II Football Team as selected by the 12-4A coaches: MOST VALUABLE PLAYER: Morris Joseph,... read more