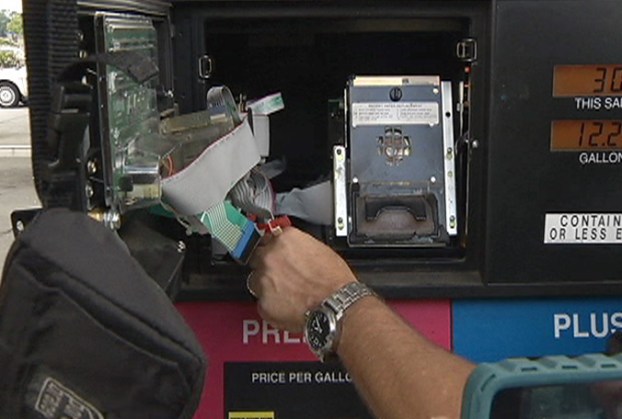 As investigators continue to look for suspects who set up skimming devices at several gas stations in Orange County recently. A trip to the gas pump can lead to a nightmare if you slide your credit card in a card reader that’s been rigged with a skimming device. Thieves use the devices to capture your credit or debit cards information.

“Technology is improving every day, and unfortunately, people are finding ways to use that against the general public.

When you’re pulling into a gas station, AAA recommends you carefully choose which gas pump you use. Experts suggest finding one in the direct line of sight of a gas station clerk. If the clerk can see the pump at all times, chances are thieves won’t tamper with it.

Taylor Ethridge The Asst Manager of the Shell station on State Highway 62 and Interstate 10 said she keeps an attendant permanently in the middle of the pumps to keep an eye on all of the pumps at all times.

AAA recommends inspecting the gas pump when you first get to it. Make sure the card reader looks like all the other card readers nearby, is firmly in place, and that there isn’t a small camera set up nearby. While security cameras are common at bank ATMs, you shouldn’t see one next to a gas pump’s card reader.

“If you must enter a PIN, we recommend you shield the keypad in case there is a camera mounted near the keypad,” said Ethridge. “Shield it so it can’t see you entering your number.”

Some skimmers are less obvious than others, as thieves are known to break into the pump device and replace the wiring. AAA recommends even if you are using a debit card, try using the credit option to avoid entering your PIN. Experts said it’s best to use a reliable credit card that protects you in case your card number is stolen or used for fraudulent purchases.

The only way to guarantee you won’t become a victim through the use of a skimmer at the gas pump: Pay with cash.

“Cash is not always the most convenient, but it is the best way to avoid becoming a victim,” said Ethridge.

Our calls to two companies which have a large number of gas stations in Texas about what they are doing to prevent skimmer thefts were not immediately answered. The most recent incent was a customer who got gas at the Kroger’s Gas Station in the 1600 block of 16th Street in Orange Thursday morning. He then got a fraud alert about a $222 charge at Best Buy in Houston. The victim was contacted to see if he made this charge? “He stated he did not” and he then called his credit card company and they stated that a credit card reader may have been placed inside the machine. If you have gotten gas at the Kroger’s in Orange please check your account and contact police immediately if you notice fraudulent activity.

Orange Police Department Captain Robert Enmon did confirm there are no recent reports of skimmers in Orange at this time.

“There have not been any recent reports of skimmers since the three that were found about a month ago,” Enmon said.

A dominant Mustang ride it was for sure

By Van Wade The Orange Leader ARLINGTON – What a coronation it was. Orange, Texas, we have a State Champion... read more