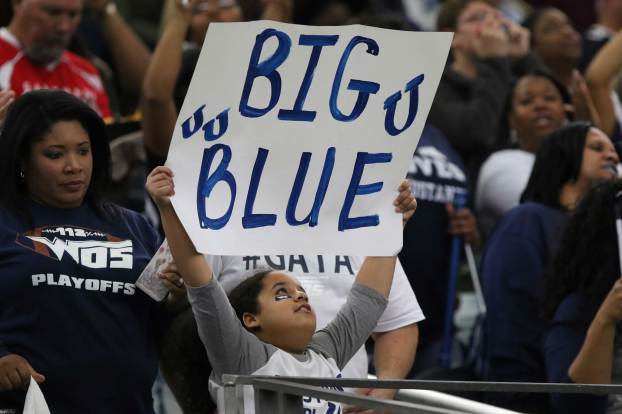 Joey Dupuy/The Orange Leader Over 17,600 fans traveled to watch the WO-S Mustangs battle it out against the Sweetwater Mustangs. WO-S Mustangs win their second straight state title in Arlington on Friday as fans from Orange shout their support.

While many Orange residents traveled to Dallas to watch the State Championship game, many stayed behind to cheer the boys from afar.

The hot topic of the day on Friday was the WO-S Mustangs vs. Sweetwater Mustangs. While those in Orange waited for word of the latest score, run, and any information we could receive, it became obvious the whole county was united in rooting for the team.

The Mustangs outscored opponents by a stunning 811-69 count. They became the 20th team in Texas football history to score more than 800 points in a season.
The WO-S defense notched eight shutouts through the course of the season and held opposing offenses out of the end zone 10 times, according to Orange Leader Sports Editor Van Wade’s article on page B2 of today’s edition.

As the game ended and the crowd celebrated a well-deserved victory. The Orange Leader received a message from a Mustang Mom. Not a WO-S Mustang Mom, but from the opposing team, Sweetwater.

“As a Sweetwater Mustang mom, I would like to congratulate you guys in your second straight title,” Paula Neal wrote. “You all beat our team and did it with class. In particular, I’d like to congratulate Jack Dallas. After doing some research, I was happy to find that he’s both an athlete and scholar. Go conquer this game of life, you have a great start. Enjoy your moment WO-S, thank you all for good, clean, well-fought battle.”

By Eric Willams The Orange Leader   As investigators continue to look for suspects who set up skimming devices at... read more