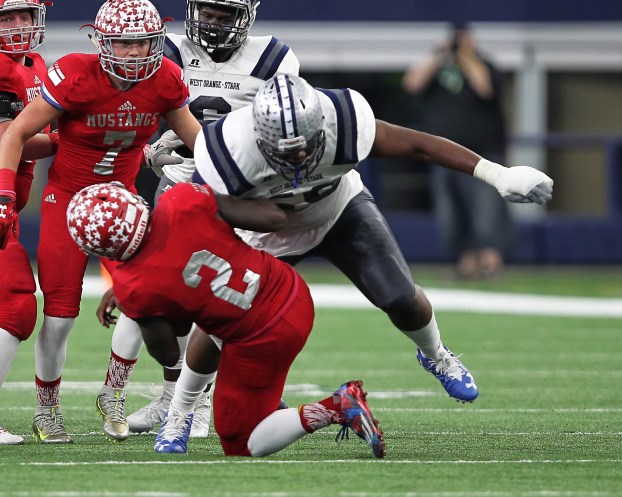 A dominant Mustang ride it was for sure

By Van Wade
The Orange Leader

ARLINGTON – What a coronation it was.
Orange, Texas, we have a State Champion again and how sweet it is.
The West Orange-Stark Mustangs waltzed out of AT&T Stadium with a Class 4A Division II State Championship Trophy and gold medals wrapped around their necks that put a stamp of another tremendous campaign for long-time coach Cornel Thompson and Co.
Over 17,600 fans were rocking at the home of the Dallas Cowboys, so how fitting was it that the team wearing Blue and White came out victorious as the Mustangs prevailed over the Sweetwater Mustangs 24-6 to capture their second straight state title, setting a school-record for wins, 16, in the process.
The Mustangs have went 31-1 in their last two campaigns.
“We’re so proud to represent such a great community and to do it two years in a row, it’s so darn special,” said Thompson. “The support we’ve received on this run has been incredible. We’re so blessed to work with such a tremendous group of kids. That makes our job so much easier. We have such great parents that have helped big-time along the way along with so many community members. There are so many people to thank and we’re so blessed.”
This group of Mustangs will go down as one of the most dominant teams in Texas high school football history. It would be hard to argue, for sure.
The Mustangs outscored opponents by a stunning 811-69 count. They became the 20th team in Texas football history to score more than 800 points in a season.
The WO-S defense notched eight shutouts through the course of the season and held opposing offenses out of the end zone 10 times.
They faced opponents with upsets on their minds all season long and the Mustangs left them all in the dust and in some pain.
“It’s going to be tough to find anybody out there that outworks us,” said Thompson. “It’s a tradition that goes way back and it takes special kids to make it through the program and this group, well, they’re extremely special.”
On the floor at AT&T Stadium after the final clock ticked down, emotions ran high, especially for one of the best senior classes ever.
There were so many tears flowing from the players, coaches, parents and fans who have followed the magical journey that it has been, especially the last three years.
“Our senior group, they’re amazing throughout,” said Thompson. “It’s hard to hold back the tears when I even talk about them. They’ve left an incredible mark on our program and our community. They will have memories to cherish forever. We love each one of them. Practices have been really fun this year with the experience we had back. They knew what to do on Mondays, Tuesdays, Wednesdays and Thursdays for sure and went out and executed on Fridays. They showed tremendous leadership
throughout.”
The Mustangs actually found themselves down for only the second time the entire season when Sweetwater grabbed a 6-0 edge in the first quarter.
However, it barely even phased them. They kept their composure and simply were not going to be denied.
The defense, how special it has been, rose up and held a stout Sweetwater offense to a mere 148 yards. The offense found its mark and sustained drives to collect 312 yards.
“It was a solid effort all the way around,” said Thompson. “When we were up 7-6 at the half we went into the locker room and they were unhappy about that. They set the tone early in the third quarter just
like we knew they were capable of.”
SO is this the best team WO-S has ever had? The Mustangs went a perfect 15-0 in 1987 to win it all.
“That 1987 team was special, no doubt, but I will put these Class 4A Division II State Champions right up there with them,” said Thompson.
“We beat everybody that was on the schedule and we’ve been able to do that twice now over all the years.  Back-to-back too, just like those 86-87 teams. I just feel so blessed to have been able to coach such tremendous athletes over the course of a lot of years.”
Now those tremendous athletes can take that big UIL trophy and parade it around Fruit City for the next several weeks.
Very well done Mustangs. VERY WELL DONE!