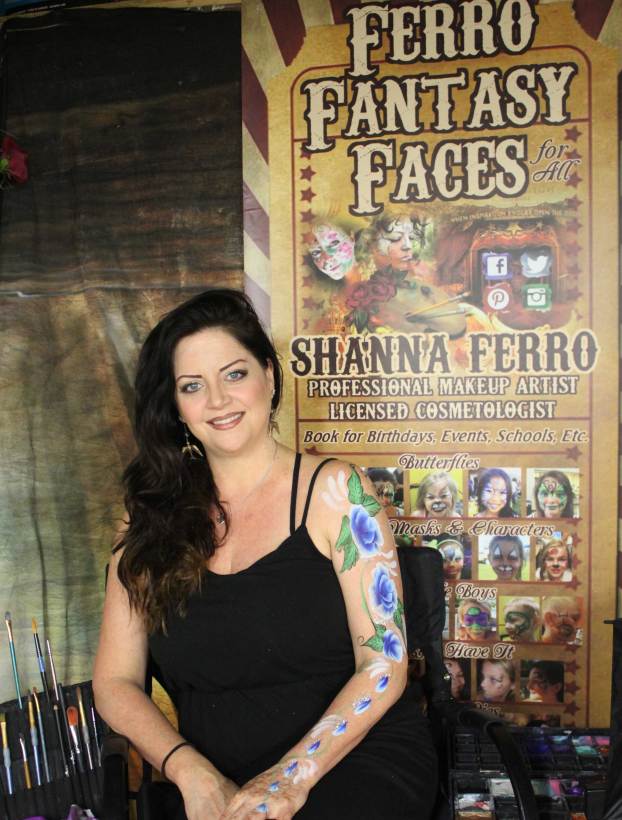 Dawn Burleigh/The Orange Leader Shanna Ferro, of Orange, recently competed in a body painting competition at the Face Painting and Body Art Convention in St. Louis, Missouri. Her team placed third while competing against talents such as Mark Reid and Shannon Holt.

Shanna Ferro, of Orange, attended her first Face Painting and Body Art Convention in November, not expecting to compete and place in a Body Painting competition.

Ferro competed against teams with well-known artists such as Mark Reid and Shannon Holt.

Reid is a famous Face and Body Artist known worldwide for his ability to transform the human face and body into works of fantasy and illusion.  His reputation and extreme talent has lead him to be the most requested International Face and Body Art Instructor in the world. He has also performed live demonstrations on television, and was featured on “I’ve Got a Secret” Game show in Hollywood, CA., and in the 2008 Penthouse Club Calendar, according to http://fpbaconvention.com/

Shannon Holt is a fine art body painter and classically trained visual artist. Shannon tried her hand at fine art body painting early, in 2008, using her model as muse, and became a professional body painter in 2009.
Shannon starred as a contestant on the body paint competition show, Skin Wars, which aired in August 2014 on GSN.  She competes in International body art competitions, and also works major festivals. Some of her favorite projects include body painting and doing glamour makeup at House of Blues, New Orleans every Mardi Gras, and Fantasy Fest in Key West, every year, according to http://shannonholtart.com/the-artist/

“I dived right in when I arrived at the convention,” Shanna Ferro said. “I took classes all day long.”

On the third night of the convention, she tried her hand at a body painting competition and learned more of the art.

By Day 5, she and a group of ladies she collaborates with online with weekly challenges opted to sign up for the conventions Body Painting Challenge.

“We had five painters, one instructor and five hours to paint our model,” Ferro said.

The problem was, the group did not have a model or an instructor at the start of the event.

“A girl walked up and volunteered to be our model,” Ferro said. “And then Ashley Blackwell, a first time body instructor, joined us.”

It was not until at a dinner later when the awards were announced, that the group discovered they placed third in the competition.

“Mark Reid was first, Shannon Holt was second and Ashley came in third,” Ferro said. “Then we were surprised to discover there was a fourth award, Best Team Spirit. Our team won!”

“I am also going to do bookings for Baby Bumps and Body painting.” Ferro said. “I want to make others feel beautiful.”