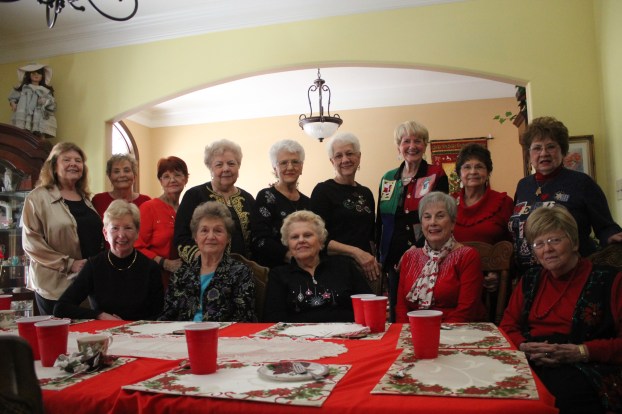 In July 1957, the sheriff asked for a radio setup at the County Courthouse.

In between, the Stark class of 1957 graduated high school.

The ladies of the 1957 graduating class held a luncheon at the home of Lynn Fields on Tuesday. The group regularly meets once a month with an average of eight – 12 attending, this time 14 were enjoying the festivities.

With ladies traveling from as far as Oklahoma and Houston, the energy was high and one had to question if the ladies might be less than truthful about their age as they were all very young at heart. Laughter continuously filled the air as they caught up on each other’s daily lives.

“We will meet once a month through out the year at different locations,” Lynn Fields said.

The ladies have enjoyed the luncheons since 2003.

The group will also travel together and reflected on a trip to Galveston where they wore t-shirts with the appearance of wearing bikinis.

“At our 55th [high school] reunion, we did a skit,” Fields said. “It was called ‘When we were young’ and since we have had two other graduating classes ask us to do the show for them.”

While the group was enjoying a buffet style lunch, plans for the 60th High School reunion was a topic as many were on the committee and were attending a meeting later in the afternoon at Jack Smith’s for the Oct. 21, 2017 event.

The Cajun Night Before Christmas