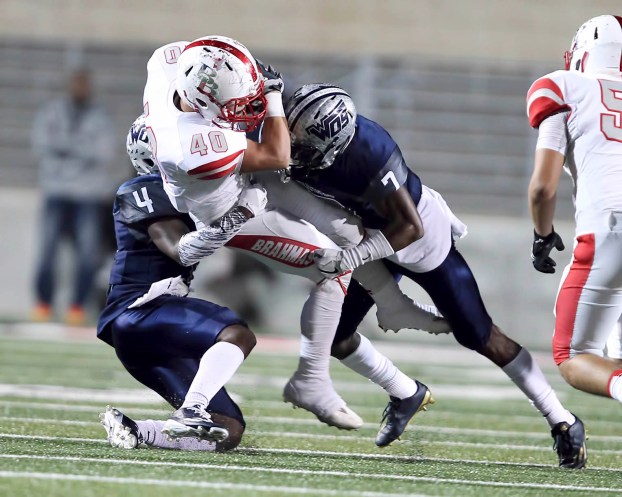 WEST ORANGE — As West Orange-Stark coach Cornel Thompson likes to say, “This won’t be our first rodeo with this bunch.”

This will mark the sixth meeting between the two programs and the fifth time they will meet in the postseason.

“We’ve had some good ones over the years, that’s for sure,” said Thompson. “That 2006 loss still stings to this day. They have had a tremendous program for so long now. We’re lining up against a darn good football team Friday night. You have to be good to reach this point, only eight teams left standing.”

The Mustangs have outscored opponents by a stunning 690-51 margin this season, including 169-21 in the playoffs after defeating Bellville 49-7 last week.

Coach Chris Jones and the Buffaloes like to spread the ball around equally in trying to throw off their opponents, mixing the running and passing games well.

“They do a lot of good things offensively that keeps you on your heels,” said Thompson. “They can put it in the air and run it in different kinds of formations. They really make you think.”

Quarterback Rustin Grimm has completed 97-of-168 passes for 1,576 yards with 17 touchdowns and seven interceptions. He doesn’t run it much, carrying 29 times for 49 yards for an offense that averages 324.6 yards a game.

“The Grimm kid reminds us a lot of the Bellville quarterback,” said Thompson. “He’s got a good arm and he will stand there under pressure and throw it.”

The Buffaloes’ most dangerous weapons are Chabastian Taylor and Jason James.

James has rushed for 623 yards and seven TDs on just 71 carries and has hauled in 27 receptions for 413 yards and five TDs.

“Those two are definitely their bellcows,” said Thompson. “The Taylor kid lines up everywhere – running back, receiver and at Wildcat Quarterback. He’s gotta a little burst in his step. The James kid, they find plenty of ways to get him the ball with quick pitches and reverses and down the field.”

“They have good depth with several kids that have gotten their hands on the ball,” said Thompson. “Their offensive line is really big, they remind us of the Robinson line we faced.”

The Buffaloes will have a tall task in trying to move the ball against a Mustang Chain Gang Defense that has allowed a mere 119.4 yards per game this season to go along with eight shutouts.

The WO-S offense has certainly picked up steam in the playoffs and is averaging 386.9 yards per outing.

Mustang quarterback Jack Dallas is approaching another 2,000-yard season after passing for 263 yards and five TDs against Bellville.

The Mustangs have spread the wealth around offensively.

Kavyn Cooper, who had a pair of TDs against Bellville, has 608 yards and 11 TDs on 62 carries.

“Offensively, we’ve been able to do some really good things the last few weeks,” said Thompson. “We’ve been able to take what defenses have giving to us and we’ve also had some explosive plays vertically down the field. We’ve limited our turnovers and we’ve got to continue doing that. We’ve also got to stay away from silly penalties that some time creep up on us. We’ve gotta go out and play strong, disciplined football. There are no easy ones left, eight tremendous programs are remaining with some familiar faces in that bunch. We’re happy to be playing in December again and hopefully we can keep the train rolling.”

The WO-S-Giddings winner will face either Cuero (13-0) or Navarro (13-0) in the Class 4A Division II State Semifinals next week. Those two will play for the Region IV title Friday in San Antonio.

ORANGEFIELD — The Orangefield Bobcats were cold from the field in their season opener Tuesday night as the Lumberton Raiders... read more