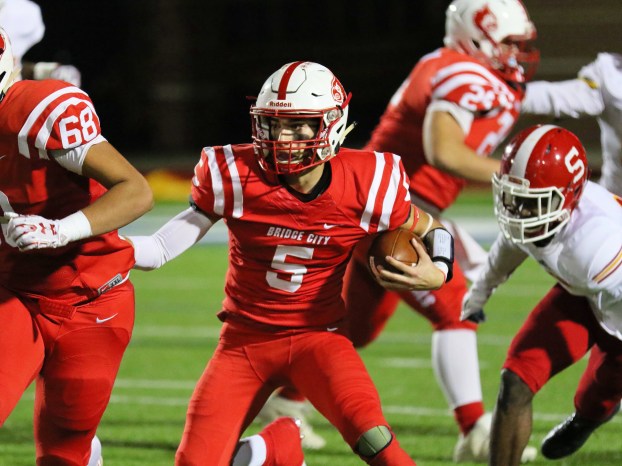 CHANNELVIEW – The Bridge City Cardinals fell just short to the Stafford Spartans in the Class 4A Region III Division I regional semifinals 37-28 at Maddry Stadium Friday night.
It was a tremendous game as the District 10-4A Division I champion Cardinals (9-3) pushed the Spartans (10-3) to the very end with a nice rally before falling by nine points as the game was much closer than the final score as the Spartans brought back an interception return for a score on a desperation pass on the game’s final play.

Stafford managed 338 total yards while the Cardinals finished with 333.
The Cardinals senior leadership showed through as they fought long and hard for a win, but Stafford just made the bigger plays as they were able to hang on for the win with the Cardinals going down swinging.
Bridge City got the first possession of the game and made the most of it.  Starting in enemy territory at the Stafford 44, they created a six-play drive using five minutes of the clock up.  Quarterback Byron Trahan dropped back and found tight end Chase Boneau for a 15-yard touchdown catch to put the Cardinals up early.  After the Brogan Brown PAT the score was 7-0 Bridge City with seven minutes left in the first
quarter.
Stafford, on the very next drive, answered back quickly. They used just three plays starting on their own 24, and ate up just two minutes of the clock.  Cameron Montgomery broke a long run for 54 yards to set up a Walter White one-yard touchdown run.  After the PAT from Kirven Bonilla the score was tied up 7-7 with 5:51 left in the first quarter.
After forcing the Cardinals to punt, the Spartans took over at their own 20 .  White would dropped back and found receiver Jalen Curry for 41 yards on three passes, including one for 12 yards to set up the field goal attempt from Bonilla who drove it through.  The score with 9:57 left in the second was 10-7 Stafford.
Bridge City took over on their own 18 and put together a long 19-play drive that ate up the clock for eight minutes.  Max Baker, Cayce Draper, Patrick Morris and Byron Trahan all made contributions on the ground during the long drive and even tight end Boneau got in on it with a first down catch.  Trahan would drive it in from the one-yard line for a touchdown to cap off the long drive.  After Brown put through the PAT the score was 14-10 Bridge City with 1:21 left in the half.
Stafford didn’t need that much time though, only using up 40 of those seconds with Walter White leading the charge on the drive.  He would find receiver Hezekiah Jones for 32 yards in the air for the touchdown.  Bonilla put the PAT through making the score 17-14.
The Cards would attempt a quick drive but come up short, making the score 17-14 Stafford heading into the half.
The Spartans put together a 46 yard-drive with a Montgomery 37-yard run to set up a White touchdown pass to James Brown for eight yards.
After the PAT the score was 24-14, but the half was just getting started.
On Stafford’s next drive Brown ran it in from 32 yards for another touchdown making it 31-14.
Bridge City finally got a good offensive drive with a Max Baker touchdown run from six yards out.  Brown made the PAT to make the score 31-21, but the intensity and anxiety was just ramping up for the two squads.
Hunter Denton made a game-saving interception in the end zone to give the Cardinals life late in the fourth quarter setting them up at the their own 20.
Denton, a track star for the Cardinals, broke away for a long 56-yard touchdown run to make the score 31-28 Stafford after the PAT went through.
On the next defensive drive you can see one of the Cardinal Senior Captain Joseph Adams walking on the field giving words of encouragement knowing this might be the seniors’ last game as
Cardinals.
After the Cardinal defense stopped the Spartans, Bridge City took over at their own 25.
The Cardinals try deep a couple of times with passes from Trahan, but just came up too short as Stafford finished the game with an interception return for a touchdown on the last play.

Morris led the Cardinal ground game with 85 yards on 19 carries. Draper had 52 yards on 12 carries as he and Morris each rushed for over 1,000 yards for the season. Baker had 51 yards on 10 totes. Boneau hauled in four receptions for 51 yards.

Montgomery had 109 yards on six carries for the Spartans while White had 82 yards on 15 carries while Brown had 54 yards on eight carries. White finished 8-of-15 for 101 yards passing.

Stafford will move on to face Carthage, a 33-31 winner over Henderson, in the 4A Division I Region III Finals next week.