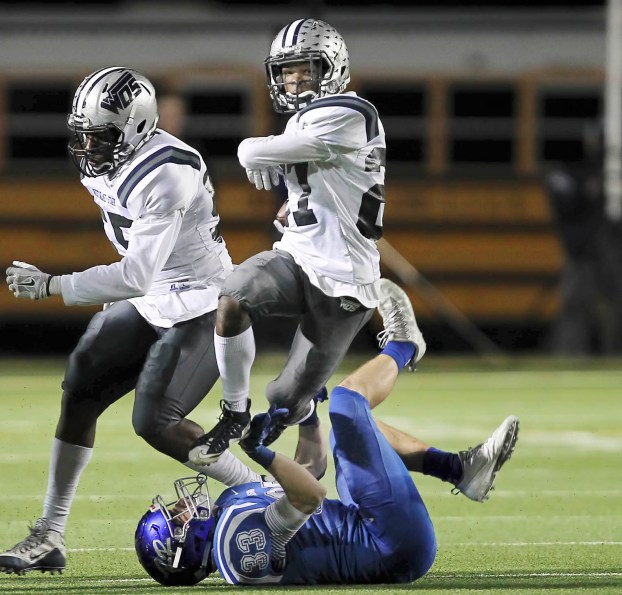 Leader Photo by Mark Pachuca WO-S' Keion Hancock (27) leaps over a Robinson defender in the area round last week.

WEST ORANGE — After slowing down one of the most prolific offenses in the state in the Class 4A ranks, the top-ranked and defending Class 4A Division II state champion West Orange-Stark Mustangs will face a familiar foe in the playoffs as they will take on the Bellville Brahmas Friday at 6 p.m. at Texan Drive Stadium in Porter in the 4A Region III Division semifinals.

The 12-4A champion Mustangs stopped Robinson 47-14 last week and have now outscored opponents 641-44 for the season, including 120-14 in the postseason.

The Brahmas, District 11-4A champions, defeated Salado 34-14 in the area round and toppled Orangefield 45-21 in bidistrict. Bellville has outscored opponents 461-164.

“We’ve got a lot of respect for Coach (Grady) Rowe and what that Bellville program has accomplished,” said Thompson. “They play hard and they are fundamentally sound in what they like to try to do. It was a dogfight last year. It was an 8-3 game at the half. I’m sure those guys are fired up at getting another crack at us.”

The Mustangs, who held a wide-open spread offense Robinson team that averaged nearly 590 yards and 52 points a game to just 339 yards and 14 points, will face an offense that they are certainly accustomed to in the Brahmas this week.

Bellville runs the classic Wing-T, Slot-T and a little I-formation, something the WO-S defense has faced eight times this season.

“We’ve played this type of offense so much, I worry about us sometimes,” said Thompson. “We’re a little concerned about our focus, we didn’t have a great practice (Monday). We just can’t expect to just show up and walk away with a win. This Bellville bunch is sitting here, just like us, in the third round. They’re a district champion and a darn good football team. It may be the same offense, but it’s a different-colored uniform and different personnel. We’ve got to go out and play hard.”

The Mustangs will certainly face one of the best backs in 4A in the form of Brahma Mac Briscoe.

The Mustangs limited the Brahmas to 128 total yards in last year’s game with Briscoe accounting for most of it with 94 yards on 23 carries.

“The Briscoe kid is the real deal,” said Thompson. “He’s not afraid to run by you are over you. He runs hard behind a physical offensive line. They have a couple other backs that can get you if you’re not careful and their quarterback can tuck it and run it too.”

WO-S is allowing a mere 115 yards a game with eight shutouts this season, including just 79.6 yards on the ground.

Briscoe, however, is not a one-man show.

Quarterback Connor McIntyre can throw, completing 38-of-80 passes for 735 yards and four TDs and has rushed for 272 yards and seven TDs on 45 carries.

Tristen Williamson leads the Brahmas with 10 catches for 248 yards and two scores.

The Mustangs had a superb offensive outing in the win over Robinson, churning out 459 yards.

In the win over Bellville last season, WO-S rolled up 462 total yards. Quarterback Jack Dallas completed 19-of-28 passes for 270 yards and passed for a score and ran for two more.

The Mustangs are averaging 383.5 yards a game entering Friday’s tilt.

Kavyn Cooper has zipped for 529 yards and six TDs on 58 carries. Keion Hancock and Justin Sibley have combined for 476 yards and four scores on just 40 carries.

Bellville’s losses came at the hands of Cameron Yoe (33-10) in their season opener and to Wharton (28-23). They did fall to Stafford (42-0) in non-district but Stafford had to forfeit due to an ineligible player.

The WO-S-Bellville winner will face either Giddings (10-2) or Liberty (10-2) in the 4A Division II Region III Finals next week.

BRIDGE CITY — After plowing through the Bay City Black Cats in the Class 4A Division I Region III area... read more