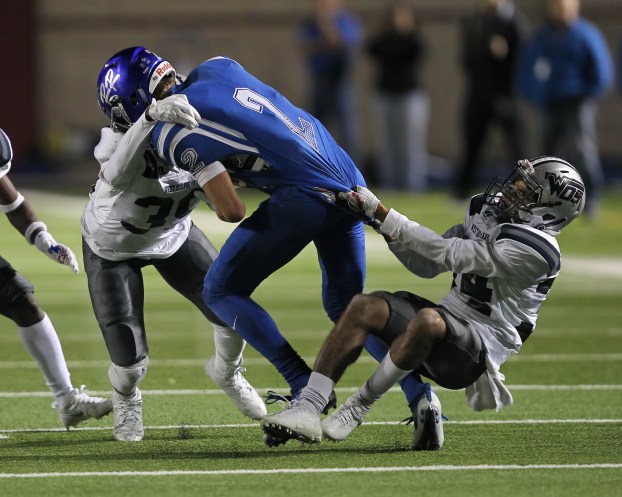 THE WOODLANDS – Facing the most potent offensive attack they’ve seen all season, the top-ranked and defending Class 4A Division II state champion West Orange-Stark Mustangs passed with flying colors as they downed the Robinson Rockets 47-14 behind a powerful ground attack at Woodforest Bank Stadium in the Class 4A Division II Region III area round playoff.

The Rockets (9-3) checked in averaging 586 yards and 52 points a game behind quarterback Chase Allison and receiver Braxton Ashcraft.

Allison entered the game with over 4,400 yards passing and over 50 touchdowns while Ashcraft had nearly 100 catches and 2,000 yards.

Well, the WO-S Chain Gang Defense limited the Rockets to a season-low 339 yards.

Allison completed 27-of-46 passes for 264 yards and a pair of scores, both going to Ashcraft, who had nine grabs for 102 yards. The Mustangs held the Rockets to 75 yards rushing on 35 carries.

“That was by far the most prolific offense we’ve seen all year and they tested us good,” said Mustang coach Cornel Thompson. “That quarterback (Allison) and receiver (Ashcraft) were as advertised. We did some good things in slowing them down, making some big stops on third and fourth down. They couldn’t generate much on the ground, so we knew they would be slinging it.”

Meanwhile, the Mustangs (12-0) piled up 459 yards of offense, doing most of the damage on the ground.

Senior tailback Jeremiah Shaw bolted over the 1,000-yard mark for the season with 104 yards on 13 carries and scored. Keion Hancock rushed for 93 yards on just four totes, scoring on a 61-yard gallop while also hauling in a 39-yard TD pass from Jack Dallas.

KJ Miller hauled in a TD pass and ran for another.

“Offensively, we felt coming in that would could move the ball on them,” said Thompson. “Our line opened up some nice holes and our backs ran hard. We had some big plays called back a few times that were just silly mistakes. We can’t afford that kind of thing down the road.”

The Mustangs will now move on to face either Bellville (9-2) or Salado (7-4) in the regional semifinals next Friday at Texan Drive Stadium in the Porter-New Caney area.

“We’re thrilled with the victory but there is plenty to go back home and work on,” said Thompson. “We lost our poise tonight at times and did some silly things. We lost our focus in certain situations and I’m not thrilled about that. They here all of the State Championship talk around town but they’ve got to go out and earn it. It’s one game at a time and next week will just be the third playoff game in the playoff journey and that’s the way they have to look at it.”

The Mustangs went in with a 27-7 halftime edge.

The Mustangs put together a quick three-play, 71-yard scoring drive on the first series of the night.

Dallas scrambled around and hit Miller with a 44-yard bullet to the Rocket 27. After a defensive holding call on the Rockets, Shaw carried twice for 17 yards, including an eight-yard tough touchdown run up the middle, sparked by the Mustang offensive line. The extra-point kick failed as the Mustangs led 6-0 with 10:30 in the first quarter.

The Rockets retaliated with a seven-play, 72-yard drive.

Allison hit Ashcraft on two passes for 38 yards, including a 15-yard slant pass over the middle for the score. Kicker Adrian Ceballos nailed the point-after, making it 7-6 Rockets with 8:42 in the first.

The Mustangs answered with a nine-play, 75-yard touchdown march.

Dallas had a big 18-yard run to the Rocket 38 and then threw a 38-yard TD pass to Miller that was called back for holding. However, the Mustangs bounced right back when Dallas hit Jarron Morris for a 29-yard gain to the 19. Miller would run the ball two times, one for 12 yards and another for a six-yard TD off the left end. Dallas hit Ronald Carter for the two-point conversion to make it 14-7 with 5:06 in the first.

The Mustang defense rose up when Keion Hancock picked off Allison at the Rocket 39 with 2:11 in the first.

Hancock got rewarded on the next play when he hauled in a perfect 39-yard TD strike from Dallas along the left side of the end zone. The PAT failed but WO-S went up 20-7 with 2:03 in the first.

The Mustangs went 65 yards in seven plays to go up 27-7 with 6:22 in the half. WO-S benefitted from two Rocket penalties that netted 27 yards. The Mustangs capped it when Dallas completed a six-yard floater to receiver Rufus Joseph in the right corner of the end zone. Chad Dallas booted the PAT to put WO-S up by 20.

Dallas completed 5-of-9 passes for 131 yards and a pair of scores in the first half. Shaw motored for 50 yards on six carries.

Allison was 13-of-23 for 153 yards with Ashcraft hauling in seven catches for 85 yards.

After holding the Rockets out at the WO-S 39 to start the third quarter, Hancock lined up as the Wildcat Quarterback and torched the Robinson defense for a 61-yard touchdown romp along the left side, pushing the lead to 34-7 with 9:54 in the third.

The Rockets found the end zone again late in the third but it took them awhile to get there. They marched from their own 25 in 22 plays that ate up8:34 of the clock. They also took advantage of a pair of Mustang penalties and they capped it when Allison floated a pass to the right side of the end zone that Allison hauled in for a three-yard score, making it 34-14 with 1:20 in the third.

WO-S answered in a hurry after a failed Robinson onside kick.

The Mustangs utilized a double reverse to perfect when Miller took the second pitch and rared back and threw it to a streaking Joseph down the right sideline for a 44-yard gain to the Rocket 2. Mandel-Turner King finished it with a two-yard TD plunge on the first play of the fourth quarter to push it to 41-14.

After stopping the Rockets on fourth down, WO-S took over at the Rocket 41 and scored four plays later when Kavyn Cooper scored on an eight-yard sweep, making it 47-14 with 4:28 left.

Special to The Leader Principal Ryan DuBose and Dr. Pauline Hargrove, Superintendent of Schools for Little Cypress-Mauriceville CISD, were the... read more