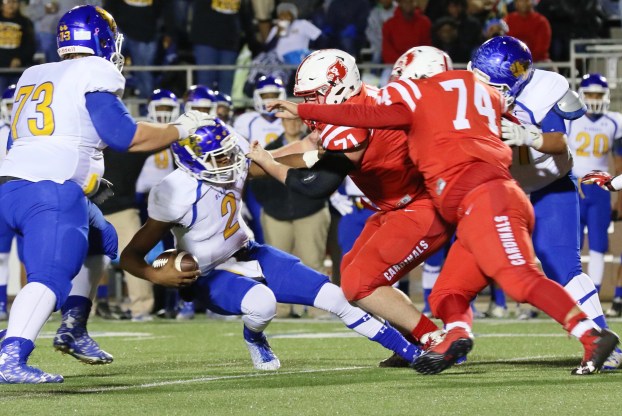 GALENA PARK – The Bridge City Cardinals toppled the Bay City Blackcats 39-19 in the area round of the Class 4A Region III Division I playoffs Friday night at Galena Park North Shore Stadium behind a powerful running game that chewed up 353 yards.

Cardinal senior back Cayce Draper came back with a vengeance after being out for a week due to injury, rushing for 165 yards, the majority of which came from big breaks created by the offensive line.

The Cardinals finished with 445 total yards as quarterback ByronTrahan passed for 92 yards and a score.

After both teams had a crack at it on offense and punted the ball away, the Cardinals took over for their second drive at their own 36.

Draper, off the injury the week before, busted wide open for a long 64-yard touchdown run to put the Cards up early in the first quarter.

After Brogan Brown converted the PAT the Cardinals were up 7-0.

Two drives later the Blackcats fired back behind their quarterback Dylan Davidson. He converts two passes for 15 and 23 yards on the drive. The second pass for 23 was to Hodari Williams out of the backfield, he scored on the play setting up the PAT to bring it even.

Hunter Denton of the Cards had other plans as he rushed around the outside to block the kick, making the score 7-6 Bridge City mid-way through the first quarter.

After forcing the Cardinals to punt, the Blackcats took back over on their own 42 yard line. Davidson, who was 11-of-14 for 104 yards, would pick up where he left off hitting wide receiver Christian Sauceda for six yards and a touchdown. Bay City would go for two and be unsuccessful making the score 12-7 Blackcats with 9:48 left in the second.

On the very next drive on the first play Cardinal quarterback Byron Trahan would take a bootleg to the right and found running back Patrick Morris for a long 56-yard pass and touchdown. Morris also had 50 yards on eight rushes. Brogan Brown put the PAT through making the score 14-12 Bridge City.

After forcing a Bridge City punt, Bay City took over at the opposite 42, but without their quarterback Davidson, who went down with an apparent leg injury. Running back Hodari Williams, who finished with 92 yards on 17 carries, would eventually take it 10 yards out for a Blackcat touchdown. Daniel Cuevas put the PAT through making the score 19-14 Bay City.

The next drive the Cardinals take over on the Bay City 45 yard line.

Draper took off for a long 42- yard run but got caught at the three yard line. Morris would punch it in from three yards out for a touchdown. Brown puts another PAT through to make it 21-19 with 2:27 left in the half.

Bridge City’s defense held strong with a three-and-out stop, forcing the Blackcats to punt. The Cards took over at the Bay City 43, looking to put it into field goal range for kicker Brown. With a Max Baker 38-yard run, it set up a 34-yard field goal for Brown. After the Bay City coach called two timeouts, Brown put it through with room to spare to make the score 24-19 with 3.4 seconds left in the half.

Baker finished with 92 yards on 12 totes.

On the first drive of the second half the Cards put together another touchdown drive. Draper found another big hole for a 15-yard touchdown. Morris would convert the two-point conversion to make the score 32-19 with 5:51 left in the third.

The Cardinals wouldn’t stop there, after a Caleb Honeycutt interception, the offense set up at the Black Cats 28. Draper yet again found a gaping hole for a 28-yard touchdown run. Brown put the PAT through to make the score 39-19 Bridge City with 2:23 left in the third.

By Van Wade The Orange Leader THE WOODLANDS – Facing the most potent offensive attack they’ve seen all season, the... read more