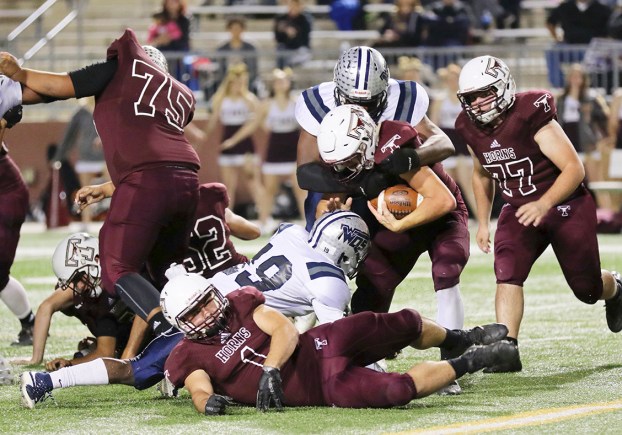 WEST ORANGE — West Orange-Stark’s amazing Chain Gang defense will be put to a challenge Friday night when they lock up against the Robinson Rockets in the Class 4A Division II Area Round of the playoffs at 7:30 p.m. at Woodforest Bank Stadium.

The defending 4A Division II State Champion Mustangs (11-0) own Class 4A’s top-ranked defense, one that allows a mere 93.7 yards a game and eight shutouts to its credit, including a 73-0 wipeout of Tarkington in bidistrict last week.

Meanwhile, the Rockets (9-2), District 9-4A runnerups, are piling up an astronomical 586.7 yards a game behind quarterback Chase Allison. The Rockets outlasted Caldwell 77-59 last week.

‘The kid has a great arm and excellent skill people to get the ball too,” said Thompson. “He throws the deep ball well and he’s very precise in it. He’s thrown it more than 400 times and has just been picked six times.”

In contrast, the Mustang defense has allowed just 13.9 yards a game passing. Eight of the 11 teams the Mustangs have faced this year have been in Slot-T and Wing-T formations. Opposing quarterbacks have completed just 26-of-100 passes for 153 yards and 11 interceptions.

The Rockets have outscored opponents 576-442 with their defense being quite leaky at times. They went 4-1 in 9-4A play, falling to district champion Lorena 43-35.

“It’s definitely going to be a different week at practice,” said Thompson. “We have not seen a true spread team in eight weeks (Silsbee). It’s going to take some adjusting too. They (Robinson) will score some points and we’re going to have to match it and then some.”

Meanwhile, the Mustangs have outscored their opponents 594-30. WO-S’ offense, which averages 374.3 yards a game, could have much gaudier numbers but has been awarded with tremendous field position and most of the first teamers have sat out much of the second halves of games. Then there is the return game, led by the likes of KJ Miller and Jarron Morris, which has put up the points.

Allison certainly has one of the best receivers in the state to get the ball to in Braxton Ashcraft. Ashcraft has hauled in a stunning 95 receptions for 1,988 yards and 35 TDs. Rhett Roznos has 50 catches for 646 yards and four TDs and Tate Wiley has 28 grabs for 503 yards and five TDs.

“Ashcraft, he’s a 6-4, 185-pound kid that’s a good athlete,” said Thompson. “He’s not a speedburner but he runs great routes and can go up and get the ball. He’s part of that great baseball program they have there.”

Tailback Isiah Houston leads the ground arsenal with 703 yards and six TDs and also has 16 catches for 335 yards and four TDs. Jordan Thompson has 545 yards and seven TDs on the ground while Allison has chipped in 301 yards and a TD.

“They have a lot of kids that can get it done,” said Thompson. “Allison and Ashcraft are quite the tandem but they have several receivers and a pair of good backs to contain too.”

Mustang senior quarterback Jack Dallas will be making his 44th start in three seasons as he will guide the offense.

Miller leads the Mustangs with 28 receptions for 516 yards and 10 TDs. Keion Hancock has 21 grabs for 365 yards and four scores while Dominique Tezeno has 13 catches for 196 yards and seven TDs.

Senior back Jeremiah Shaw is closing in on the 1,000-yard mark. Despite sitting out a lot in second-half blowouts, Shaw has churned out 962 yards and 15 TDs on just 108 carries. Fellow tailback Kavyn Cooper has 519 yards and eight TDs on 51 carries and sophomore Justin Sibley has shined the last two weeks of the season since being brought up.

“Offensively, we just have to play smart and move the chains,” said Thompson. “Robinson runs a 50 defense and they like to stunt and pressure you. Hopefully we can find those creases.”

The WO-S senior class will be playing their 44th game at the varsity level if they played their sophomore year, seeking their 40th win in the process.

The winner of the WO-S-Robinson matchup will face either Bellville or Salado in the Region III semifinals next week.

BRIDGE CITY — After nabbing the program’s first playoff victory since 2005, the Bridge City Cardinals will be looking for... read more