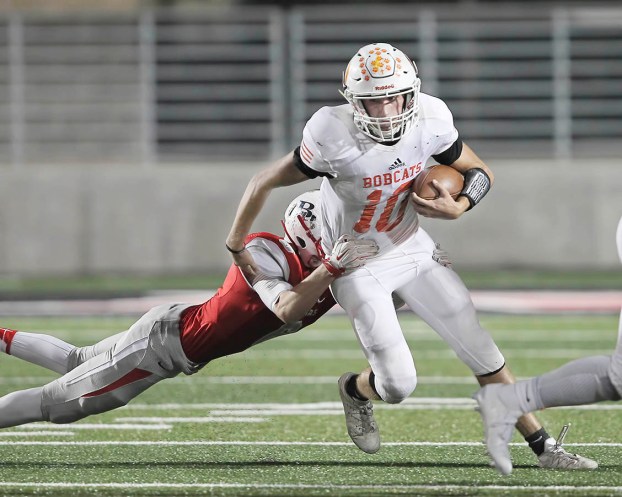 PORTER — The Orangefield Bobcats made a good showing against the Brahmas of Bellville Saturday night in the bi-district round of the UIL playoffs.

Unfortunately, the Bobcats would be eliminated after falling 45-21 despite a stellar offensive showing that garnered 397 yards. Caleb Kress showed just how dynamic the Bobcat offense could be as he passed for 113 yards on 7 of 10 passing. He also chipped in 101 yards on the ground.

The two squads opened the game with stellar defensive showings. The Brahmas took the opening kickoff, but would be forced to punt after six plays. The Brahma kicker would fumble the punt giving the Bobcats stellar field position to start their first drive.

Orangefield quickly ripped off a few big runs to work their way into field goal range. The Cats’ attempted a 23 yard field goal, but an illegal substitution would negate the field goal and give the Brahmas the ball back inside their own 20 yard line.

The Bobcats would again stop the Brahma attack by stuffing their run game along with Dylan Williams breaking up two passes from quarterback, Conner Mcintyre. The two teams remained tied at zero as the horn sounded to end the first quarter.

Kress and the Bobcat offense put the Brahmas on their heels by spreading the ball around. Following a couple of failed run attempts, Kress, would hit Michael Teeples for a 30 -yard pass and catch on third and 13 to keep the Bobcats driving. Christopher McGee kept the defense guessing with four big runs for 29 yards before capping the drive off with a five yard touchdown run off the left side. The score gave the Cats’ a 7-0 advantage with just under six minutes remaining in the first half. McGee finished off his final game in a Bobcat uniform with 217 total yards of offense that included four receptions for 61 yards.

The Bobcat lead lasted mere seconds as the Brahmas battled back. Tillon Bryant took the first play of the next possession 57 yards to tie the game at seven points each. Bryant had just five carries for the Brahmas, but tallied 87 yards to make the most of his totes.

Orangefield kept things moving on offense, but two penalties crushed their momentum. A would-be first down after a Kress 12 yard pass to Zack Dischler was negated by a personal foul that backed the Cats’ up 15 yards. The penalty essentially stalled the drive and forced a punt. McGee had several great punts on the night including a nice punt on the stalled drive to pin Bellville inside their own 20 yard line.

Despite the Bobcats pinning the Brahmas deep in their own territory it didn’t take long for the Brahmas to push the ball out past their 20 yard line. Mack Brisco took a first down hand off from the 28 yard line that went for 72 yards and a Brahma touchdown. Brisco galloped just off the right guard and reversed field down the left sideline putting the Brahmas ahead, 14-7 at halftime. Brisco led all running backs on the night with 238 yards on 23 carries.

Bobcat head coach, Josh Smalley, had his guys ready for the second half. It took just one play for the Bobcats to tie the game. Kress took an option play for a keeper around the left side and was able to into the Brahma secondary where he was able to outrun the safeties in route to a 75 yard touchdown. The big run ignited the onlooking Bobcat crowd and seemed to confuse the Brahma defense.

The Cats’ defense stuffed the Brahma rushing attack momentarily forcing Mcintyre to rely on the passing game which had been stagnant through the first half of play. However, Mcintyre was able to find Williamson for a 60 yard pass on third and 12 to put the Brahmas inside the redzone. The Bobcat defense again pushed back and forced the Brahmas to kick a field goal. Michael Mendez drilled the 31 yard field goal to put the Brahmas ahead, 17-14, with 7:27 left in the third quarter.

Orangefield kept with their explosive offense. They had 2 plays through the first eight minutes of the second half for 151 yards. The second carry of the half resulted in McGee scampering for 76 yards for another lead change and giving the Bobcats the lead once again. The Cats’ led, 21-17 with under five minutes left in the third quarter.

Brisco finally got the Brahma running game going in the second half. Combined with Mcintyre clicking in the passing game the Brahmas quickly worked a 6-play 52-yard drive for a touchdown. Clayton Stallones skipped in from 12 yards out to give the Brahmas a 24-21 lead heading into the fourth quarter. Brahma running backs combined for 386 yards on the ground.

The Bobcat defense couldn’t keep up in the fourth quarter as the Brahmas seemed to run away with the game. The final score didn’t indicate just how close the game was entering the final quarter of play.

Mcintyre took advantage of a gassed Bobcat defense just moments into the fourth. He’d find his way out of a pile where he seemed to stuffed for no gain, but turned it into a 34 yard touchdown run. The Bobcats still had life down just 10, 31-21 with just over 11 minutes of game left to play.

The next Bobcat series didn’t go as well as the opening series of the half. Kress tossed an interception on a desperate third and long to give the Brahmas the ball near mid-field.

Brisco finished off the Bobcats down the stretch; including a 50-yard dart up the middle which he torched the entire Bobcat secondary. The score put the icing on the cake for the Brahmas as they led, 38-21 with the game out of reach for the Bobcats. Brisco chipped in one more score to finalize the night and catapult the Brahmas into the area round of the playoffs.

Despite the loss the Bobcats finished the 2016 season on a high-note they came into the game as underdogs, but shocked everyone keeping the game close through three quarters of play. The more dynamic offense they showed could be a promising sign for next season with the possibility of Mason Gonzales starting at quarterback. A relatively young Bobcat team will look substantially different in 2017 with promising young players like, Blake Bradley and Dylan Williams who will play both sides of the ball. McGee finishes his stellar career as a Bobcat with over 1000 yards rushing.

Bellville will head into the area round of the UIL Playoffs where they’ll meet Salado.

Cardinals rally to turn back Center, 35-28

By Caleb Adams Leader Correspondent   SPLENDORA — The Bridge City Cardinals beat the Center Roughriders in the first round... read more