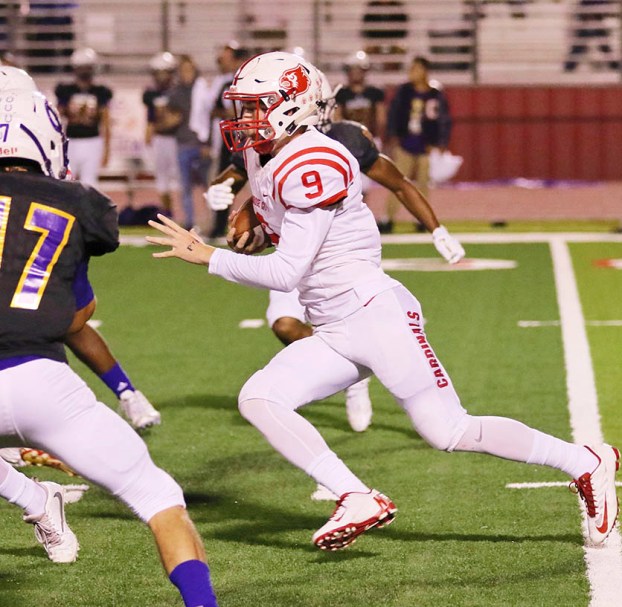 Cardinals rally to turn back Center, 35-28

SPLENDORA — The Bridge City Cardinals beat the Center Roughriders in the first round of the Class 4A Division I bidistrict playoffs 35-28 in a thriller of a game that came down to the last play of the night Friday at Splendora High School.

The game went down to the wire and delivered in every way you could possibly think in Texas Friday Night Lights.

The District 10-4A champion Cardinals (8-2) rushed for over 430 yards as a team. The rushing leader for the Cardinals was running back Patrick Morris, who finished with 226 yards and three touchdowns on the night.

The Cardinals will now move on to face the Bay City Black Cats (7-4) in the area round next week.

It was Bridge City’s first playoff win since 2005 when the Cardinals defeated Jasper 23-0.

Center (6-5) quarterback Kyle Parks made the game tough for Bridge City all night finding multiple holes for 91 rushing yards and threw for 255 yards. Octavious Evans was his number one receiver with 194 yards receiving.

The Cardinals take over on the first drive of the game after taking the kickoff to their own 25. Without their main running back Cayce Draper, the rest of the backfield had have to pick up the slack and did they ever.

The Cardinals drove all the way down the field and capped off the drive with a touchdown from 37 yards out by speedy back Max Baker. Baker had 80 yards on 10 totes. Brogan Brown put the PAT through and makes the score 7-0 Bridge City early in the first.

The Roughriders took over on the very next drive and answered with their own long march. Parks accounted for all of the yards running and passing. He capped off the drive with a 19 yard-pass to receiver Octavious Evans. Marcos Lopez put the PAT through to make it 7-7 with 5:52 left in the first quarter.

Each defense found their footing with the help of a few penalties to get a stop. The first quarter ended without any more scoring at 7-7.

Bridge City, on its first possession in the second quarter had a promising drive, but running back Andy Lara lost the ball fighting for extra yards and Center took full advantage of it. Lara did run well though at fullback, rushing for 62 yards on eight carries.

Parks took over again for the Roughriders at their own 39. Parks ran for 15 yards on the drive and passed 43 yards and a touchdown. He found receiver Jatarious Evans for 37 yards and the score. Lopez would put the PAT through again, making the score 14-7 Center with 6:32 left in the second quarter.

Bridge City, on the very next drive, would answer right back with a score of their own. They took over on their own 43. After 10 plays and four different people carrying the ball quarterback Byron Trahan called his own number from the one-yard line and scored. After Brown made the PAT the score was tied at 14-14 with two minutes left in the half.

Center would take over at its own 30 and Parks would lock in and take over on this drive. He hits Octavious Evans twice for 35 yards on the scoring march. Parks took it in from three yards out for a touchdown. Lopez booted the PAT to make the score 21-14 Center to end the first half.

After stopping Center on the opening drive of the second half, Bridge City took over at its own 20. Morris really took over on the series, carrying it six times including the 16- yard touchdown run for the Cardinals. However Brogan Brown missed the PAT to make it 21-20 Center with 1:15 left in the third quarter.

Center took over on their own and Parks promptly led them down the field again. Parks would hit Evans for a long 52-yard pass to set up the Roughriders for the rest of the drive. Parks would run it in from two yards out for a touchdown. The Rough Riders make the PAT to make the score 28-20.

On the very next series the Cardinals opened up their offense starting from their own 22. Bridge City put together 10 plays and cruised 78 yards to score. Again running back Morris put his head down for some tough yards on the drive and scored from four yards out. The Cardinals went for two and Baker zipped it in to make the score 28-28 with 6:36 left in the fourth quarter.

The Cardinals defensive front stood tall stopping the strong Roughriders’ attack, forcing them to punt it away, setting up the Cardinals on their own 14 with five minutes left in the game.

Morris and the big boys up front were determined to win and proved it on this drive. Morris carried the ball eight times on this series out of the 14 plays the Cardinals ran. With the clock dwindling down and the intensity in the stadium rising, the Cardinals went for it on a fourth-and-one play inside the Center 10. Who other than Morris would barrel ahead and not only get the first down, but the touchdown. Brown put the PAT through, making the score 35-28 Bridge City with 0:28 seconds left in the game.

Center got one last shot to score needing 80 yards for the end zone. Parks drops back and hits his receiver Evans for 29 yards to set up a long Hail Mary pass. Parks dropped back and looked for Octavius Evans and hit him at the Cardinal 5, but he was dropped by the Cardinal defense.

CROCKETT — Henderson, one of the most explosive teams out of East Texas, took down the Little Cypress-Mauriceville Battlin’ Bears... read more