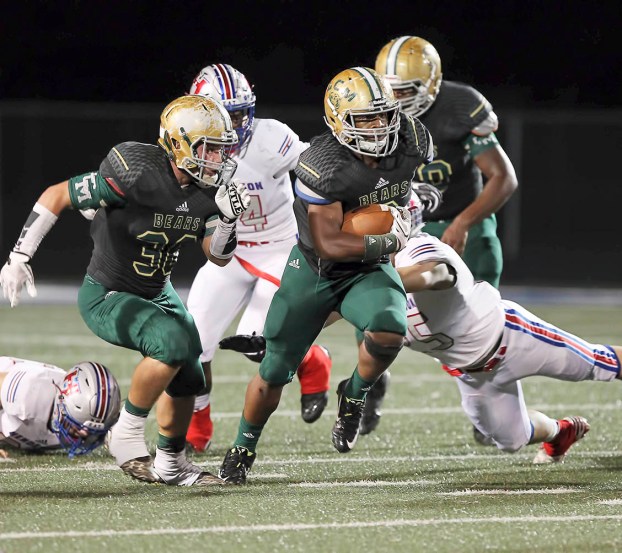 CROCKETT — Henderson, one of the most explosive teams out of East Texas, took down the Little Cypress-Mauriceville Battlin’ Bears 48-12 in the bidistrict round of the Class 4A Division I playoffs Friday night at Crockett High School.

Quarterback Trae Hall completed 15-of-19 passes for 264 yards and a touchdown. Running back Lakendrick Vanzandt zipped for 168 yards and three TDs on just 12 carries. Receiver Trestan Ebner had six catches for 111 yards.

The Bears finished with 251 yards.

Fullback J’Lon Douglas had 94 yards on 11 carries while Chris Winters had 60 yards on 17 totes. Quarterback Beau Bickham completed 3-of-10 passes for 62 yards.

Hall completed 12-of-14 passes for 176 yards in the half. Reeceiver Trestan Ebner had six catches for 111 yards while Vanzandt zipped for 136 yards on just eight carries.

Douglas led the Bears with six first-half carries for 71 yards.

The Lions navigated 71 yards in eight plays on the first series of the night to go up 8-0.

Hall completed all three of his passes for 26 yards while Vanzandt chewed up 43 yards on five carries and he capped it with a three-yard touchdown run up the middle. Vanzandt also ran in the two-point conversion run as the Lions led 8-0 with 9:01 left in the first quarter.

The Bear running game answered quickly on their first possession of the night as they drove 71 yards in eight plays to hit paydirt.

Douglas carried four times for 48 yards and Winters had 23 yards on three carries. Doulas got the drive going with a 29-yard jaunt to the Henderson 42 and another 13-yard run to the Lion 8. He capped it with a one-yard touchdown run. The extra-point kick failed as the Bears trailed 8-6.

The Lions bounced right back up, going 57 yards in two plays. Hall connected with Ebner on a 49-yard scoring bomb. The run for the point-after failed as the Lions snagged a 14-6 lead with 4:39 in the first.

The Bears had a miscue that Henderson took advantage as a bad LC-M punt snap gave the Lions the ball at the Bear 13.

Vanzandt scored on the next play, going 13 yards for the score. Axel Romero booted the extra-point to give Henderson a 21-6 edge with 2:36 in the first.

The Lions took advantage of a Bear fumble at the LC-M 8 and scored two plays later when Hall took a keeper six yards for the score to push the lead to 28-6.

Vanzandt helped push the Lions’ lead to 35-6 with 8:47 in the half when he tore through the Bear defense for a 63-yard touchdown gallop.

The Bears moved from the Henderson 41 to the Lion 3 but the Lions got Bickham to cough it up after a botched handoff at the 6.

The Lions went up 45-6 after a five-play, 61-yard drive late in the third quarter. Hall connected with receiver Matt Childers for a 34-yard gain to the Bear 3 and backup running back Lynn Freeney finished it with a three-yard touchdown run.

Henderson drove 51 yards down to the Bear 9 midway through the fourth quarter and settled for a 27-yard field goal by Christian Sanchez.

The Bears put together a nice 7-play, 70-yard drive late in the fourth quarter.

Bickham completed two passes for 39 yards on the march, including a 19-yarder to Katon Brown that got to the Lion 13. Three plays later Winters sprinted in for a 10-yard touchdown, trimming it to 48-13.

The Lions will move on to the area round where they will take on the El Campo Ricebirds.