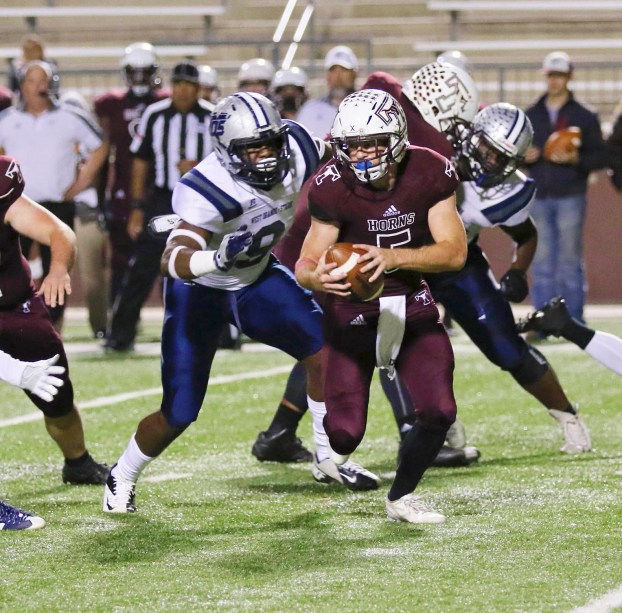 BEAUMONT – Making it look way too easy, the defending Class 4A Division II champion West Orange-Stark Mustangs bombarded the Tarkington Longhorns 73-0 in the 4A Region III bidistrict playoffs Thursday night at the Thomas Center.
The Longhorns (3-7), the fourth-place team out of 11-4A, were simply no match for the 12-4A champion Mustangs (11-0).

“We’re 11-0 and bidistrict champions but we just can’t take this one for granted,” said Mustang coach Cornel Thompson. “We had a good game plan as far as trying to stop Tarkington. We’ve seen this offense (Slot-T) eight times this season. It’s going to get a lot tougher from here on out.”

The Mustangs (11-0), who collected their eighth shutout of the season, will now move on to face either Waco Robinson (8-2) or  Caldwell (5-5) in the area round next week.

“It’s going to be a whole different ballgame next week,” said Thompson. “Robinson is a spread team that has put up big numbers all year and they can flat-out throw it. Caldwell, we’ve met them in the past. We’ve got to have a good week of practice. We can’t show any complacency. I think we did that a little tonight. We’ve got some things to work on offensively and in our kicking game. We had too many penalties tonight, which was simply not us executing.”
If it were a prizefight, it would have been called early.
The Mustangs bruised the Longhorns the entire first half as they cruised to a 40-0 cushion at intermission.
The Chain Gang Defense held Tarkington to a minus eight yards in the first 24 minutes and a minus one for the night.
The Mustangs, meanwhile, rolled up 207 total yards in the first half and dazzling return man Jarron Morris returned two punts for scores. Morris had three fair catches in the second half in which he probably could have gotten big yardage on as well.

“Jarron, wow, he’s had a big couple weeks for us in the return game,” said Thompson. “Glad he’s on our side along with KJ Miller as far as the return game goes. I can’t believe they kicked it too him like that.”
WO-S quarterback Jack Dallas completed 9-of-11 passes for 115 yards in the half and three touchdown passes as the Longhorns backed way off from the WO-S receivers and the Mustangs made them pay.
Jeremiah Shaw led the WO-S ground game in the half with five carries for 50 yards.

The Mustangs finished with 429 total yards, despite having a running clock with about nine minutes remaining.

Backup tailback Justin Sibley rumbled for 110 yards on five carries while back Kavyn Cooper motored for 50 yards on just five totes as WO-S had 306 yards on the ground on just 23 carries.
After forcing a quick three-and-out on Tarkington’s first series of the night, the Mustangs took over at the Longhorn 37 and scored two plays later when Dallas tossed a short pass to KJ Miller to the right near the line of scrimmage and Miller did the rest, sprinting 37 yards down the right sideline for the touchdown. The point-after kick failed as WO-S led 6-0 with 8:38 in the first quarter.
The Mustangs put together a five-play, 57-yard scoring march on their second possession. Jeremiah Shaw carried twice for 23 yards. The score came when Dallas dropped back and found Keion Hancock, who broke open along the right side. Dallas was right on the money with the throw and Hancock eluded two Tarkington attempted tackles and turned it up field for a 32-yard touchdown. Chad Dallas drilled the point-after, making it 13-0 with 3:24 in the first.
Potent WO-S return man Morris, who brought back two punt returns for scores against Orangefield last week, shredded the Tarkington punt team for a 49-yard return for a touchdown as he hauled it on along the left side and bolted through the middle for the score, increasing the lead to 20-0 with 1:35 in the first.
Getting good field position again after forcing another three-and-out, the Mustangs put together a five-play, 46-yard drive to go up 27-0 early in the second quarter.
Back Kavyn Cooper broke loose on a 21-yard scamper all the way to the Longhorn 8. Dallas capped it when he tossed a short pass to the left that receiver Dominique Tezeno hauled in and cut back across the middle and broke the plain of the end zone with a Longhorn hanging on him.
Tarkington made the mistake to punt the ball away to Morris late in the half and the speedster made the Longhorns pay again as he scooped up the leather at the Mustang 37 and zipped through the Longhorn punt unit like it was butter as he went 63 yards for the score to help push the gap to 34-0 with 1:34 in the half.
The Mustangs blocked a punt by Tarkington punter Hunter Trahan, who bobbled the snap and WO-S’ Ronald Carter recovered it in the end zone for the score, making it 40-0 with 0:19 in the half.
Shaw added to the Longhorns’ misery when he went 55 yards up the gut to make it 47-0 with 11:24 left in the third.
The Mustangs utilized another short field to score again.
Starting at the Longhorn 28, WO-S hit paydirt four plays later. Back Justin Sibley broke off a 22-yarder to the 1 and Mandel Turner-King finished it with a one-yard touchdown, pushing it to 53-0 with 7:37 in the third.
The Mustangs scored again in the third with a two-play, 49-yard drive.
Chaka Watson broke loose on a 25-yard gallop and Kavyn Cooper capped it with a 24-yard touchdown dart as he dragged a Longhorn into the end zone to make it 60-0 with 4:45 in the third.
Mustang Cory Skinner added to the scoring when he picked off Petit and returned it 15 yards for a touchdown with 10:09 remaining for a 67-0 score.
Sibley capped the scoring with a 55-yard touchdown jaunt with 2:34 remaining.

Here is the All-District 22-4A Volleyball Team as selected by the 22-4A head coaches: DISTRICT MVP: Mallorie Brooks, Silsbee OUTSTANDING... read more