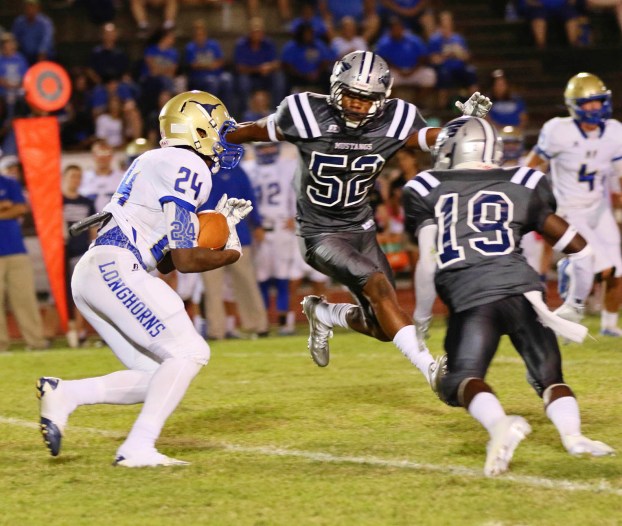 WEST ORANGE — It’s time for the “third season” for the West Orange-Stark Mustangs, something they are very familiar with as they will look to defend their Class 4A Division II State Title by entering the playoffs Thursday night.

The Mustangs (10-0), District 12-4A Division I champions and ranked No. 1 in the Class 4A ranks, will tangle with the Tarkington Longhorns (3-6), the fourth-place team out of District 11-4A, at 7:30 p.m. at the Butch Thomas Center in Beaumont in the bidistrict round of the playoffs.

The Mustangs closed out the regular season with a flurry, downing Orangefield 60-0.

Meanwhile, the Longhorns fell to Madisonville 21-15 in a battle for third-place in 11-4A.

The Mustangs have been amazing on both sides of the ball as they have outscored opponents 521-30 for the season, including 222-7 in 12-4A play.

The defense has seven shutouts to its credit and is allowing a very, very slim 104.0 yards a contest.

Offensively, the Mustangs have churned out 368.5 yards a contest.

Tailback Jeremiah Shaw has bolted for 857 yards and 14 TDs on just 102 carries while fellow back Kavyn Cooper has zipped for 468 yards and seven TDs on 51 totes.

Receiver KJ Miller, after hauling in two long TD passes against Orangefield, has 24 receptions for 459 yards and nine TDs. Keion Hancock has 19 grabs for 321 yards and three TDs while Dominique Tezeno has caught 12 passes, half of them going for scores, for 188 yards.

The Longhorns made the playoffs last year, going 4-7 and got into the postseason fray again this year, despite going 1-3 in district play.

The Mustangs and Longhorns have one common opponent — Liberty. WO-S defeated the Panthers 32-7 while Tarkington fell to the Panthers 56-14.

Tarkington has used a pair of quarterbacks at times this season in Cody Petit and Harrison Williams as they utilize the Slot-T offense that the Mustangs have seen so much as a defense this year.

The Longhorns have an all-district caliber back in fullback Cody Parish along with tailback Kolby Hvamstead.

The WO-S-Tarkington winner will face either Waco Robinson (8-2) or Caldwell (5-5) in the area round next week.

BRIDGE CITY — After collecting their first district title since 2002, the Bridge City Cardinals will be honing in on... read more