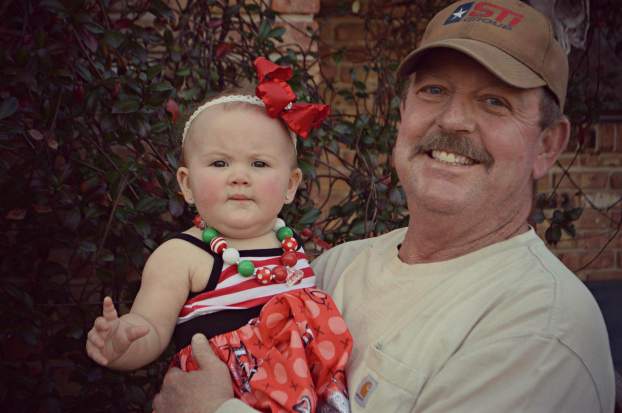 Courtesy Photo Danny Killian with his granddaughter Avery, 18 months. A benefit for Killian is being held on Saturday from 9 a.m. – 5 p.m. at Cotton Cay’s located at 8379 State Hwy. 87 in Orange as he continues his battle against colon cancer.

A benefit for Danny Killian and his battle against colon cancer will be held from 9 a.m. – 5 p.m. at Cotton Cay’s located at 8379 State Hwy. 87 in Orange.

Killian and his wife will celebrate their 20th wedding anniversary on Nov. 18. During his five-year battle with cancer, treatment plans has limited his time in the sunlight and prevented the couple from taking a vacation in five years.

Killian was diagnosed with colon cancer, which he thought he had beat when it was discovered in his lymph nodes and eventually manifested in his bloodstream as well.

“I am quiet positive I am going to beat this,” Killian said. “The good Lord will pull me through. It is not a matter of if but when.”

Killian the company he works for, STI Group, has been supportive during his battle.

“I am so blessed with my family,” Killian said. “Support from the Lord. The spiritual support from STI has been above the call of duty.”

He spoke highly of all his sons and their support.

“Cole will see me curled up in bed sick and ask what he can do to help me or is there anything I need,” Killian said.

The benefit is to help pay down on medical and hospital bills.

“When I get caught up, I am willing to pay if forward to give help to another in need,” Killian said.

The event will also feature live music and fun for all ages.

Special to The Leader   Orange County Sheriff Keith Merritt will be holding an event to honor all veterans and... read more