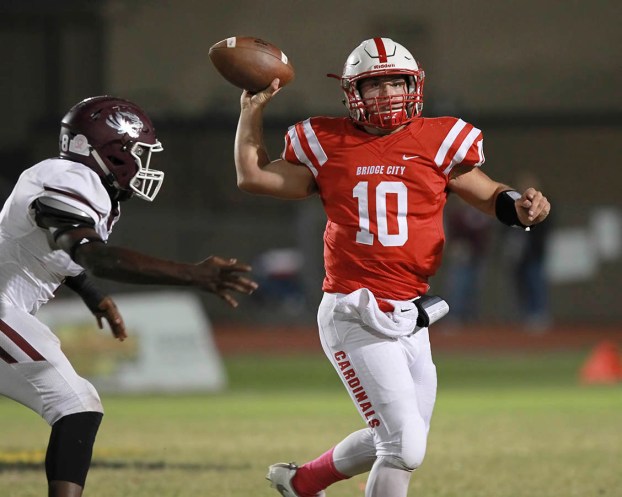 BRIDGE CITY — After collecting their first district title since 2002, the Bridge City Cardinals will be honing in on their first postseason win since 2005 Friday night when the 10-4A Division I champions take on the Center Roughriders in the 4A Division I bidistrict playoffs at 7:30 p.m. at Splendora High School.

The Cardinals (7-2) have certainly been on a tear, winning five straight games to take the 10-4A crown.

They will certainly be facing a Center (6-4) squad that is probably better than their overall record indicates. Center has been outscored 366-238 for the season.

The Roughriders competed in a very rugged District 9-4A to take the fourth-place spot and their schedule has been one of the toughest in the state.

The Roughriders like to spread teams out with their passing game, sparked by quarterback Kyle Parks. Parks has completed 148-of-235 passes for 1,872 yards to go along with 13 touchdowns and five interceptions.

Center only averages about 90 yards on the ground. JaCarlos Hall leads Center in rushing with 368 yards and a TD on 92 carries while Kyle Parks has 290 yards and 13 TDs on 146 totes.

The Roughriders will face a Cardinal defense that is allowing 335.8 yards a game.

The Center defense will look to contain a Bridge City running game that has shredded opponents, especially in 10-4A play.

In the last three games, the Cardinals have averaged almost 500 yards a game and are averaging 404.9 for the season behind a senior-led bull-dozing offensive line.

The Cardinals had three backs go over 100 yards again in a 56-14 romp of Huffman last week.

Fullback Cayce Draper went over the 1,000-yard mark for the third straight year last week with 126 yards at Huffman. Draper now has 1,010 yards for his senior campaign. However, the Cardinals suffered a blow during workouts Monday as Draper suffered a fracture in his foot after a weight fell down on it. He will miss Friday’s game for sure.

Both Patrick Morris and Max Baker eclipsed the 100-yard mark last week and each one of them has over 600 yards for the season. Speedster Hunter Denton is also a huge factor in the backfield, at receiver and in the return game.

Cardinal quarterback Byron Trahan has been impressive toting the ball of late and has caught opposing defensives in a trap with accurate passing as well.

The winner of the Bridge City-Center bidistrict battle will face either Houston Yates (7-3) or Bay City (6-4) in the area round next week.