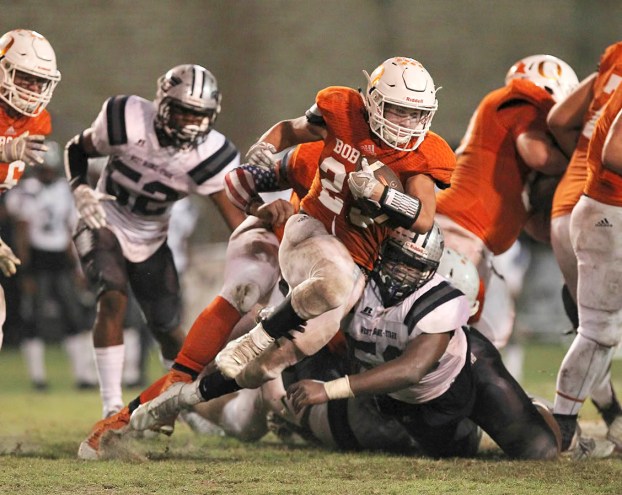 ORANGEFIELD — Punching in their fourth straight playoff ticket, the Orangefield Bobcats will be seeking a bidistrict postseason win for the third year against a formidable Bellville squad Saturday at 6 p.m. at Texans Drive Stadium in Porter in the Class 4A Division II playoffs.

The Bobcats (5-5), the fourth-place team out of 12-4A, will battle an experienced Brahmas (8-2) unit to see who will advance to the area round.

Bellville certainly leans on senior running back Mac Briscoe for an offense that churns out 382.4 yards a game, 330.1 via the ground.

Briscoe has exploded for a whopping 1,805 yards and 24 touchdowns on 212 carries to ignite his squad nearly every week.

Bellville quarterback Connor McIntyre has completed 29-of-67 passes for 523 yards with four TDs and two picks and has rushed for 198 yards and four scores on 38 totes.

The Brahmas will try to stare down a pretty good Orangefield defense that has allowed just 259.9 yards a game.

The Brahmas have a great deal of experience back on defense this year from a tea mthat went 11-3 last year and advanced to the Region III Finals where they fell to eventual state champion West Orange-Stark 42-3.

The Bobcats will turn to their running game as well in trying to rumble through the Bellville defense.

Bobcat back Christopher McGee is closing in on the 1,000-yard mark. He now has 945 yards and nine TDs on 130 carries.

Wesley Frillou has 442 yards and five TDs on 63 carries. Christian Louvier has found the end zone five times and has 277 yards on 52 totes. Quarterback Caleb Kress has 247 yards and six scores on 74 carries.

The Orangefield-Bellville winner will face either LaGrange (4-5) or Salado (6-4) in the area round next week.

ORANGEFIELD – Outright district champs again. That’s what the Class 4A-ranked No. 1 West Orange-Stark Mustangs are after they dominated... read more