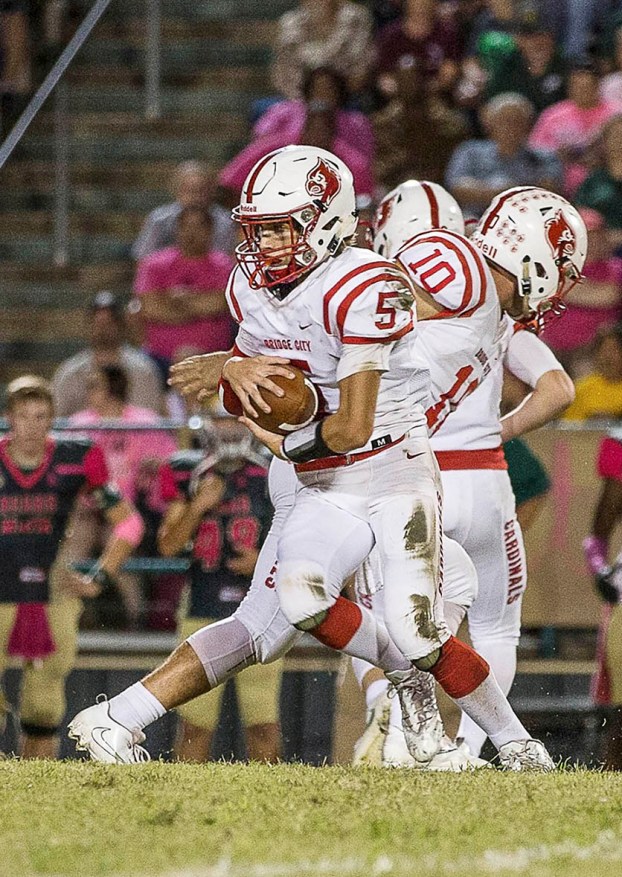 10-4A champ Cardinals bust up Huffman

HUFFMAN — The Bridge City Cardinals swamped the Huffman Falcons in the final regular season game of the year in Huffman 56-14 in convincing fashion.

The Cardinals (7-2, 5-0) entered the final week of the regular season undefeated in district play and captured the District 10-4A Division I crown flawlessly with high-flying fashion against the Falcons (4-6, 1-4) .

Bridge City will now move on to face Center (6-4), the fourth-place team out of District 9-4A, in the bidistrict round of the playoffs next Friday at 7:30 p.m. at Splendora High School.

The Cardinals piled up 434 yards of total offense. Bridge City showed a strong offense with multiple running backs able to take control of any drive.

Bridge City’s run game came out well, running for 247 rushing yards in the first half behind five different players.

Running back Cayce Draper lead the Cardinals with 21 carries for 126 yards rushing for the night. Draper would pass the 1,000 yard mark rushing on the season. Draper was part of a three-headed monster for the Falcon defense as he was one of three Cardinals rushers that went over 100 yards. Patrick Morris had 126 yards on eight carries and Max Baker had 110 yards on five totes.

Huffman finished with 304 yards. Back Cameron McMahon had 123 yards on 24 carries. Quarterback Dylan Lorfing was 10-of-21 for 120 yards but threw four interceptions, three of them to Cardinal defensive back Zack Honeycutt.

Bridge City’s run game came out, well, running for 247 rushing yards in the first half behind five different players.

The Cardinals took the opening kickoff to their own 40 and got their offense going in a hurry. Running back Max Baker found a big hole on the outside and ran for 34 yards to set up a Patrick Morris four-yard touchdown run to put the Cards on the board in just under three minutes. After an Alfredo Heraldez PAT the score was 7-0 Bridge City.

Huffman took over at their own 33 and started a promising drive with quarterback Dylan Lorfting hitting six passes for 57 yards. The Cardinal defense quickly adjusted and on the next throw cornerback Zach Honeycutt intercepted the pass to set the Cardinals up to really take over the game.

Starting on their own 23 the Cardinals continued with their strong run game as their offensive line won the battle in the trenches. Max Baker found the outside again, breaking away for 62 yards all the way to the Falcons 4. Cayce Draper puts his head down and powered in for the second Cardinal touchdown with two minutes left in the first quarter. After another Heraldez PAT the score is was 14-0 Bridge City.

The Falcons again started a strong drive in the second quarter, but this time they used the running game behind running back Camron McMahan.   The Cardinal defense stood strong to stop the run and forced the Falcons to pass again, but Zach Honeycutt jumped another route and picked off Lorfting for his second interception of the night.

Bridge City, on its third drive, took back over without missing a beat. This time quarterback Byron Trahan ran out for a bootleg and found wide receiver Seth Martin for a long 48-yard pass to the Falcons one yard line. Trahan called his own number and sneaked it in for a one yard touchdown run. This time Heraldez missed the PAT to make the score 20-0 Bridge City with 11 minutes left in the first half.

The Cardinals stopped the Falcons, forcing a punt, as Bridge City took over at the Falcon 47. Draper took over with the majority of the carries on the drive with five carries. The Cardinals would accumulate five first downs on the march, finishing it off with a Baker 10-yard touchdown run. Patrick Morris took it out wide to convert on the two-point conversion to make it 28-0 Bridge City with three and a half minutes in the first half left.

After a turnover on downs by the Falcons, the Cards took over on their own 32. On the first play Trahan connected with tight end Chase Boneau for a 20 -yard pass. The Cardinal run game took over again driving it all the way down. Draper finishes the drive off with a 13-yard touchdown run. Heraldez hitthe PAT and makes the score 35-0 with 0:34 seconds left in the first half.

Huffman fumbledon the kickoff and Bridge City recovered on the Falcons. Draper takes it in for another touchdown, this time from five yards out. After Heraldez hit the PAT the score was 42-0 Bridge City to end the first half.

The Falcons opened up the second half firing away with a touchdown drive with McMahan leading the way. Lorfting punched it in from eight yards out to put Huffman on the board. After the PAT went through the score was 42-7 Bridge City early in the third quarter.

Huffman attempted an onside kick and recovered at the Cardinal 49. Lorfting fired 20 yards down the field to hit Donavan Gray, but Gray fumbled and Bridge City recovered at their own 12. Draper carried five times on the drive for 50 yards to set up a Trahan two-yard touchdown run. Heraldez put another PAT up for the Cards to make it 49-7 with three minutes left in the third quarter.

After Honeycutt picks off Lorfing for a third time on the night, Bridge City set up with avery short field on the Falcons 3. Alfredo Heraldez punches it in for another Cardinal touchdown from three yards out . After Heraldez put in the PAT the score was 56-7 Bridge City with 1:41 left in the third.

Huffman would put together one more scoring drive on the back of McMahan who eventually scored from two yards out. After the PAT the Falcons make the score 56-14.

Huffman drove down one more time, but the Cardinal defense holds strong with another interception, this time from Brady Coulter.

BC: Byron Trahan one yard touchdown run. Heraldez PAT no good 20-0 BC

KOUNTZE – They fought the No. 3 ranked Class 4A hard in the Class 4A Region III area round of... read more