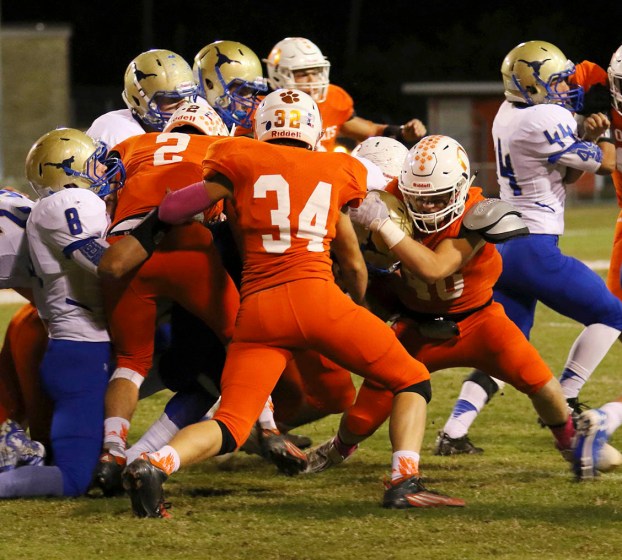 Mustangs, Bobcats will battle for 12-4A top spot

ORANGEFIELD — Playoffs will be calling both the West Orange-Stark Mustangs and the Orangefield Bobcats next week but there is still “a little something” to be decided this Friday — like the District 12-4A Division II championship and No. 1 seed.

The Mustangs (9-0, 3-0), defending Class 4A Division II state champions and top-ranked team in 4A this week, have already clinched at least a share of the 12-4A title and a win Friday would clinch it outright.

However, the Bobcats (5-4, 2-1), if they can defeat the Mustangs for the first time in school history, would earn the district’s top seed entering the postseason.

Orangefield picked up a huge road win against Hardin-Jefferson 17-15 last week to set up the showdown while the Mustangs took down Liberty 32-7.

The Bobcats had a tremendous defensive effort in slowing down the Hawks last week, limiting H-J to just 181 yards of total offense.

Offensively, Bobcat back shredded the H-J defense for 224 yards and two touchdowns on 24 carries as he closes in on the 1,000-yard mark. McGee has now rumbled for 909 yards and nine touchdowns for the season.

The Bobcats will check in averaging 286 yards a game and will face arguably the best 4A defense in the state in the form of the Mustangs. WO-S is allowing a mere 109.4 yards a game.

Bobcat tailback Wesley Frillou has rushed for 442 yards and five TDs on 63 carries. Quarterback Caleb Kress has 298 yards and six TDs on 73 totes.

The Bobcats have churned out the yards with their run-oriented Slot-T formations, a averaging 271 yards on the ground. They have passed for just 121 yards for the season.

Orangefield will be looking to slow down a high-octane Mustang offense.

Quarterback Jack Dallas pulls the trigger. The three-year starter has completed 79-of-132 passes for 1,223 yards and 19 TDs. He passed for four TDs and ran for another in the win over Liberty.

The Mustangs are churning out 366.7 yards a contest and will tangle with a Bobcat defense that is allowing just 245.4.

Mustang tailback Jeremiah Shaw has rushed for 806 yards and 13 TDs on just 91 carries and has eight catches for 162 yards and a pair of scores. Fellow back Kavyn Cooper has zipped for 443 yards and seven TDs on 47 attempts.

10-4A champion Cards look to finish strong at Huffman

BRIDGE CITY — After clinching their first district title since 2002, the Bridge City Cardinals will look to finish their... read more