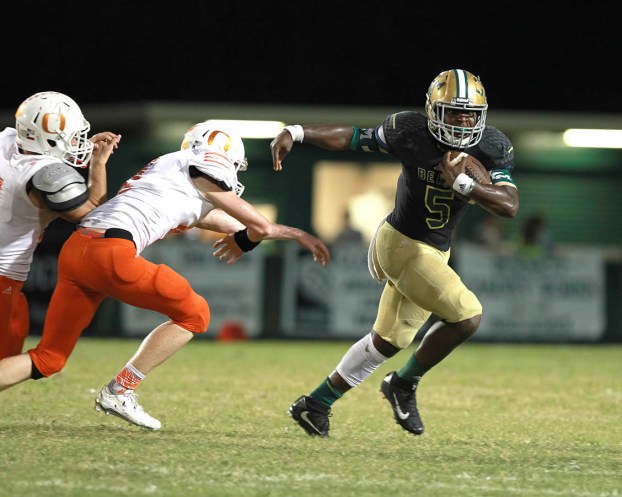 Bears travel to Navasota to battle for 3rd

LITTLE CYPRESS — Putting together their most complete performance of the season last week, the Little Cypress-Mauriceville Battlin’ Bears clinched a playoff berth out of District 10-4A Division I.

This week, the Bears will have a chance to improve their playoff seeding when they take a long road trip to Navasota to take on the Rattlers.

The winner of the contest will represent 10-4A in the playoffs as the No. 3 seed while the loser will check in as the fourth seed.

The Bears piled up 515 yards on total offense against the Indians with a balanced attack, rushing for 267 yards and passing for 248.

LC-M quarterback Beau Bickham was tremendous in the win, completing 12-of-18 passes for 248 yards and three scores and running for two more. He has completed 86-of-158 passes for 1,334 yards, spreading the ball around to a talented group of receivers that include Trey Guillory, Katon Brown, Mark Netherly and Keegan Sonnier.

Tailback Chris Winters zipped for 108 yards on 12 carries and now has 894 yards on 153 carries for the season for a Bear offense that is averaging 334.4 yards a game.

The Bears’ defense, which is allowing 345.8 yards a game, had a stellar effort against Cleveland, limiting the Indians to 231 yards.

The Rattlers struggled mightily through a 0-5 non-district campaign but have bounced back by going .500 in district.

Navasota has had some adjusting to to go through as long-time successful coach Lee Fedora left and first-year head coach Patrick Goodman took over. The Rattlers were a 12-1 team last season.

Navasota loves to spread the ball around and has a nice pair of returners back including running back Keyondrick Philio, who rushed for 1,253 yards and 20 touchdowns and receiver Deeldre Richardson, who hauled in 823 receiving yards and eight TDs.

Quarterback Jeb Malek passed for 255 yards and three TDs against Bridge City while Philio had 97 yards on 12 carries.

This will be the first-ever meeting between the two schools.

By Van Wade The Orange Leader BUNA – It was a walk in the park for the Little Cypress-Mauriceville Lady... read more