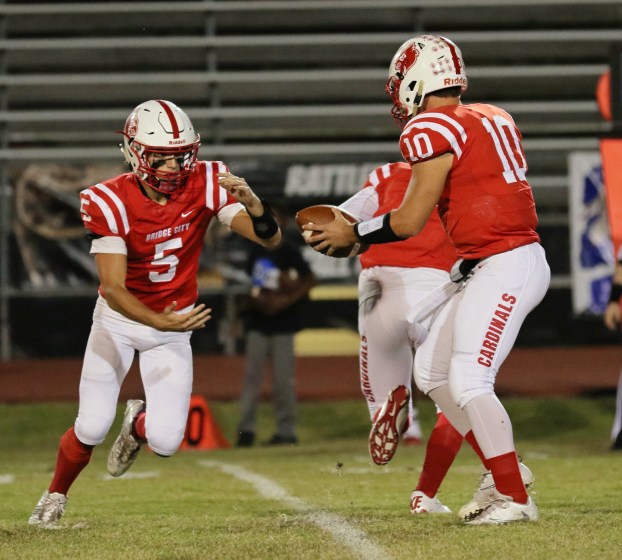 10-4A champion Cards look to finish strong at Huffman

BRIDGE CITY — After clinching their first district title since 2002, the Bridge City Cardinals will look to finish their District 10-4A Division I campaign with some flair Friday night when they travel to Huffman to take on the Falcons.

They basically sealed the title with a dramatic win over Silsbee two weeks ago and then cincned it with a 49-31 victory over Navasota last week.

The Cardinals have basically been running through opponents at will the last month behind a tremendously talented array of backs and a senior-oriented offensive front wall.

The Cardinals have piled up 1,041 yards of total offense in their last two games, including 527 against Navasota last week, all coming via the ground arsenal.

Bridge City will check into Huffman piling up401.3 yards per game.

Fullback Cayce Draper powers the balanced Cardinal running game with 884 yards as he closes in on another 1,000-yard season after he zipped for 146 yards on 14 totes against Navasota last week.

Tailbacks Patrick Morris and Max Baker are both closing in on the 600-yard mark after combining for 200 yards on 24 carries against Navasota.

Receiver/running back Hunter Denton has been a jack-of-all-trades as well, especially with big plays the last two weeks, including hauling in the game-winning touchdown pass against Silsbee and bringing back a kickoff 80 yards for a score last week.

Quarterback Byron Trahan has ran a steady ship and had a big rushing game against Navasota with 88 yards last week.

Defensively, the Cardinals are allowing 339.8 yards a game, 445.0 a game in their last two against high-octane offenses in Silsbee and Navasota.

The Falcons returned a wealth of experience from last year’s 6-5 playoff unit.

Huffman has struggled to keep opponents out of the end zone despite returning eight starters on defense.

The Falcons returned a wealth of experience from last year’s 6-5 playoff unit but has dealt with some injuries, especially on the offensive side of the ball.

Quarterbacks Kessler Bordwell and Brody Logsdon have both seen time at quarterback.

The Falcons have a pair of stellar backs in Camron McMahon and Darius Dugas and three excellent receivers in Dylan Lorfing, Trey Lundy and Noah Thomas.

This will mark the third meeting between the two units with the series tied 1-1. The Cardinals made a nice rally to take last year’s contest 41-34 and made a crucial goal line stand at the end to preserve the victory.

Bears travel to Navasota to battle for 3rd