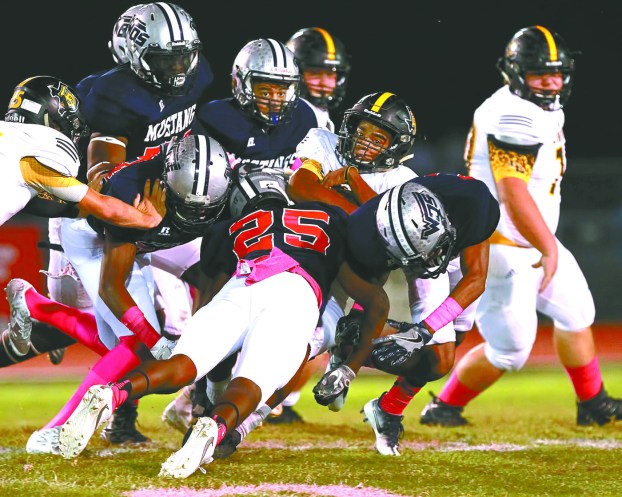 Mustangs claim another district title with win over Liberty

WEST ORANGE — It wasn’t as easy sledding as the final score indicated but the West Orange-Stark Mustangs snared yet another district title as they took down the Liberty Panthers 32-7 in District 12-4A Division II action at Hooks Stadium Friday night.

Liberty (8-2, 2-2) used a bruising running game featuring a huge offensive line and big backs to move the ball against a WO-S defense that only had been allowing 89.3 yards a game coming in.

The Panthers ran the ball 60 times for 271 total yards but the Mustang defense rose up when it had too.

“Give Liberty credit, they’re so dang big up front, 280-pound guys almost across the board,” said Mustang coach Cornel Thompson. “They have excellent backs that not only have speed but power too. They really controlled things up front on us in the first half. We challenged our defense in the second half, wanting them to get the ball back to our offense and they were able to do that. We truly needed a game like this after the bye week. It definitely showed us some things we need to work on.”

Mustang tailback Jeremiah Shaw rushed for 80 yards on just six carries and hauled in a 47-yard TD pass. Dominique Tezeno, KJ Miller and Keion Hancock scored on the other two TD passes while Dallas also ran for a score.

“Offensively, we felt like we could put the ball in the end zone as long as we were getting opportunities,” said Thompson. “We were able to create some big plays. The first drive of the second half really set the tone for us.”

Liberty back Alex Brown, who had 1,598 yards and 16 TDs entering the game, finished with 68 yards on 17 tough carries before leaving with an injury midway through the third. Tyris Williams rushed for 88 yards on 15 carries and scored the lone TD. Jeremiah Guillory had 64 yards on nine totes and fullback River Lucy had 54 yards on 14 carries.

“Liberty has a good football team, one capable of making a pretty good run in the playoffs,” said Thompson. “It’s a quality win for us and I think we’re coming out of this one pretty healthy. At this time of the year, you want to be healthy and keep improving because the playoffs are a coming and we still have some work to do and things to fix. Right now, we’re just happy to claim another district championship and go play well at Orangefield. We want to get focused and try to play better than the way we did tonight and I know the kids are capable of it.”

The Mustangs scored in just three plays on the first series of the second half, capping it with a perfectly executed screen as Dallas dropped back with a wall of blockers and completed it to Shaw in the left flat. Shaw turned on the afterburners, zipping down the left sideline for a 47-yard touchdown pass. The point-after kick failed but the Mustangs snared a 19-7 lead with 10:41 in the third.
Liberty moved from its own 24 to the Mustang 31 thanks to a 38-yard run by Guillory. However, on fourth-and-6 from the 31, Williams coughed up the leather to Mustang Morris Joseph at the 37 with 5:45 in the third.
The Mustangs made the Panthers pay. Tailback Kavyn Cooper broke loose for a 38-yard dart all the way down to the Panther 15.
Facing a fourth-and-16 from the 21 the Mustangs went for it and cashed in when Dallas dropped back and hurled a perfect pass to the left back corner of the end zone and slick receiver KJ Miller made a great catch before going out of bounds for the touchdown. The point-after kick was blocked but the Mustangs held a 25-7 advantage with 2:57 in the third.
Liberty stopped a Mustang drive with 8:09 left when Jarius Hill picked off a Dallas pass at the Panther 10.
The Panthers moved to the WO-S 34 in nine plays but the Mustangs were able to stuff Williams on fourth down.
The Mustangs cruised the 66 yards in just four plays to hit paydirt again when Dallas hit Dominique Tezeno with a short pass to the right and Tezeno reversed field and turned it into a 40-yard touchdown down the left sideline to make it 32-7 with 1:21 left.
The Panthers controlled the clock and the ball for most of the first half but still found themselves down 13-7 at intermission.
Liberty had the ball 21:01 of the first half while the Mustangs had it for just 2:59.
Liberty piled up 35 plays, notched 11 first downs and racked up 142 yards in the first 24 minutes.
The Mustangs just ran 10 plays in the half for 120 total yards but came away with two touchdowns, one from Dallas’ arm to receiver Keion Hancock and the other from Dallas’ legs as they led at the half.
Liberty managed two first downs and ate up 5:15 of the clock on the first series of the game until the Mustangs stuffed them on fourth-and-5 from the WO-S 46.
It took the Mustangs just two plays to find the end zone.
Shaw broke through the middle of the Panther defense for a 37-yard gallop to the Panther 17. Dallas then teamed up with receiver Keion Hancock on a pass to the left flat and Hancock did the rest, sprinting to the end for a 17-yard score. Chad Dallas nailed the point-after to give WO-S the 7-0 edge with 6:21 in the first quarter.
Liberty put together another time-consuming drive on their next series
and found the end zone.
The Panthers navigated 68 yards in 13 plays, chewing 7:03 off the clock.
Williams carried four times for 39 yards on the series as the Panthers picked up five first downs on the march. Williams capped it with a two-yard touchdown off left tackle. Jesus Landeverde made the extra-point as the Panthers tied it 7-7 with 11:18 in the half.
The Mustangs promptly put together a seven-play, 56-yard scoring march to seize the lead again.
The big play came when Dallas hit Hancock on a 30-yard gain to the Liberty 7. Hancock fumbled the ball at the 7 but KJ Miller scooped it up and brought it down to the 2.
An illegal procudure call pushed the Mustangs back to the 7 but Dallas scored two plays later when he scooted around the left side on a busted play, scoring from three yards out. The point-after kick failed with WO-S holding a 13-7 lead with 8:55 in the half.
The Panthers, however, remained patience as they took the ball at their own 25 and utilized 14 straight running plays to move the ball to the Mustang 32.
With time running down, the Panthers had to throw the ball though and the Mustangs made them pay when defensive back Demorris Thibodeaux picked off quarterback JJ Slack at the WO-S 5 as the Panthers tried a flea flicker with 0:12 in the half.
Brown burised his way to 67 yards on 16 carries in the half while Williams had 44 yards on seven totes.
Dallas was 3-for-4 for 58 yards in the half while Hancock had two catches for 47 yards. Shaw was the leading rusher with that one big carry for 37 yards.
The Mustangs will wrap up their regular season next week with a short trip to Orange County rival Orangefield while Liberty has its bye week.

By Ronnie Hughes Leader Correspondent BRIDGE CITY — It’s been over a decade in the making, but the Cardinals of... read more