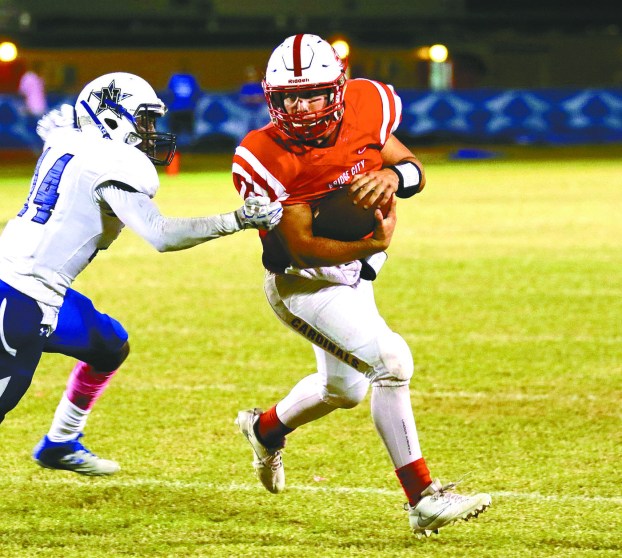 BRIDGE CITY — It’s been over a decade in the making, but the Cardinals of Bridge City have captured their first district title since 2002.

Since head coach Dwayne Dubois took the reigns in 2015 the Cardinals are 13-6 overall and Fridays’ 49-31, win over the Navasota Rattlers secures the teams’ second consecutive trip to the post season.

The Cardinals (6-2, 4-0) rushing attack was too much for the Rattlers to handle as they garnered 537 yards on the ground with two players topping the century mark.

The Rattlers (2-7, 2-2) opened the game and appeared to catch the Cardinals off guard with a high-powered offensive attack. Ladadrien Walker took a pass from quarterback Jeb Malek on the first play from scrimmage 31 yards. Malek capped the seven-play 63-yard drive with a 20-yard touchdown pass to Deeldre Richardson as the Rattlers led early, 7-0, after taking just over two minutes off the clock in the opening quarter.

An explosive Cardinal ground game showed no mercy on the visiting Rattler team. They opened the game with an 11-play drive that chewed up 69 yards along with eating over five minutes off the clock. The Cards’ averaged seven yards per carry on their opening drive with senior Cayce Draper, rumbling in from five yards out to knot the game at seven points each. Draper ended his final home game as a Cardinal with 146 yards rushing and three scores.

After being shoved around on the first Rattler offensive possession the Cardinal defense shoved back and forced a quick three-and-out. The Cardinal offense took the ball back close to midfield at their own 42 .

The Cardinal offense kept with their ground game and ripped off several big runs to move past midfield. Patrick Morris dropped a would-be touchdown pass from Byron Trahan on the fourth play of the drive. Trahan, however, took the ball into his own hands on third down and kept the Cardinal drive alive pushing forward just outside the realm of the red zone. The Rattler defense battened down the hatches and forced a Cardinal turnover. Draper coughed up the ball at the Rattler 24 with Da’ Tron Taylor recovering for the Rattlers as time expired in the first quarter. The score remained tied at seven entering the second quarter.

Following another stellar defensive effort by the Cardinals. The Rattlers again gave the Cards’ excellent field position near midfield following a punt.

Trahan and the Cardinal offense started their third possession at their own 45. The ground and pound attack was working over the Rattler defense forcing them onto their heels all night. Trahan had four rushes for 37 yards on the drive including a 19-yard touchdown in which he carried two Rattler defenders on his back. The touchdown gave the Cardinals a lead which they’d keep the duration of the game.

The Rattlers took to the air after a stagnant start by their run game. Malek hit Eric Lattimore for a 52-yard completion and planting the Rattlers inside the Cardinal 20. The Cardinal defense would dig in and force the Rattlers to a field goal after shutting down three rushing attempts by Keyondrick Phillio. Luis Baeza nailed the 30-yard field goal to pull the Rattlers closer, 14-10.

The Cardinal offense closed out the scoring in the first half with Hunter Denton taking his first carry of the game 18 yards for a Cardinal touchdown.

A 298-yard rushing performance in the first half gave the Cardinals a 21-10 lead while the defense kept the Rattler run game corralled with just 31 yards.

Speedster Denton ignited the crowd to open the second half. He grabbed the kickoff and returned it up the middle for an 80-yard touchdown which essentially put a stamp on the Cardinals night as they led, 28-10.

The Rattlers attempted to answer the Cardinal kickoff return with one of their own. A 97-yard return by Walker would be negated by a set of off-setting penalties. The Rattlers drive stalled following a 45-yard run by Phillio. The Cards took over at their own 20 after a turnover on downs.

The Cardinal offense chewed up some clock and marched 80 yards in 14 plays for another Draper touchdown as he danced in from three yards out. The score gave Bridge City a commanding lead, 35-10.

Navasota managed to open up their run game after Malek opened the next series with four consecutive completions. Malek capped the drive with a 13-yard gallop on a play action bootleg that caught Bridge City by surprise. Malek had a stellar night under center; passing for 255 yards with three touchdowns on 18-of-30 passing.

Bridge City continued to pile on the yardage in the fourth quarter with Navasota having no answer for the dominant run game. Draper scored his third touchdown of the night on a 38-yard blast up the middle and Max Baker capped the Cardinal scoring, ripping off a 34 yard touchdown. Baker finished with 97 yards rushing while Patrick Morris went for 103 yards.

The Rattler passing attack was all that seemed to be working against the Cardinal defense. They took just over a minute to march 64 yards and grab a quick score. Malek hit Lattimore across the middle for a 38-yard touchdown reception. Malek tossed another touchdown following a Cardinal fumble. He hit Elidrick Powell on a nine -yard screen pass to pull the score to, 49-31, but the Cardinal offense managed to drain the clock and keep the Rattler offense from chipping away at the lead any further.

Despite four fumbles and three of those lost for turnovers the Cardinals held on for the win, but will need to clean up the turnovers before the post season rolls around. They will polish off the regular season on the road traveling to Huffman next Friday.