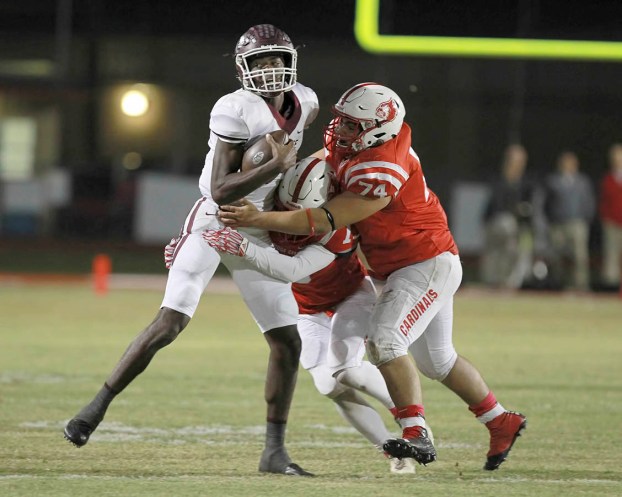 BRIDGE CITY — After proving their might in one of the best wins in school history last week, the Bridge City Cardinals will look to maintain their focus and “finish” down the stretch when they welcome in the Navasota Rattlers in a big District 10-4A Division clash Friday at Ward Stadium in the first ever meeting between the two schools.

Meanwhile, the Rattlers (2-6, 2-1), who have been a powerhouse in recent years, winning state titles in 2012 and 2014, have had their struggles this year but find themselves still in the hunt for the 10-4A crown.

The Cardinals wore down the Tigers with their pounding running game last week, led by the likes of a talented backfield that includes Cayce Draper, Patrick Morris, Max Baker and Hunter Denton and a senior-led offensive line.

The Cardinals racked up 504 yards of total offense, including 429 on the ground on 61 carries.

However, the biggest play of the night came on quarterback Byron Trahan’s beautiful 37-yard touchdown strike to Denton that helped seal the game for the Redbirds.

Draper cut up the Tigers for 161 bruising yards on 20 carries. He now has 738 yards for the season. Baker, Denton and Morris teamed up for 235 yards on 29 carries in the win over Silsbee. Morris and Baker are both closing in on the 500-yard marks for the campaign as the Cardinals will check in averaging 381.9 yards a contest.

The Rattlers struggled mightily through a 0-5 non-district campaigns but have bounced back. They have defeated Huffman 28-21 and Cleveland 37-9 with a slipup to Silsbee in a 35-7 road loss in the middle.

Navasota has had some adjusting to to go through as long-time successful coach Lee Fedora left and first-year head coach Patrick Goodman took over. The Rattlers were a 12-1 team last season.

Navasota loves to spread the ball around and has a nice pair of returners back including running back Keyondrick Philio, who rushed for 1,253 yards and 20 touchdowns and receiver Deeldre Richardson, who hauled in 823 receiving yards and eight TDs.

The Cardinals, which gave up 503 yards to the Tigers last week, are now allowing 332.9 yards per game.

Defensive lineman Jabril Hunter, who had 82 tackles and seven sacks and defensive back Da’tron Taylor, who had 87 stops last season spearhead a defense that will try to slow down the powerful Cardinal running arsenal.

Bears will welcome in Indians

LITTLE CYPRESS — Getting themselves back on track with a huge road win at Huffman last week, the Little Cypress-Mauriceville... read more