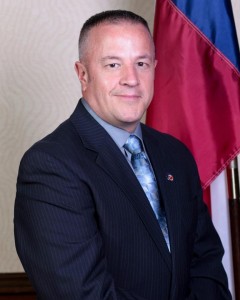 PRESS RELEASE — Sheriff Keith Merritt and his staff are saddened to announce the loss of a valuable member of the Orange County Sheriff’s Office. Captain Tom Ray passed away unexpectedly on Sunday morning, October 23rd of a possible heart attack.

46 year old Ray, affectionately known as Tom Ray or T Ray, was a 1989 graduate of Orangefield High School and a 1994 graduate of the Orange County Sheriff’s Academy. Ray began his career with the Orange County Sheriff’s Office in 1993 as a Reserve Patrol Deputy and was hired full-time in 1995 in the Corrections Division, where he eventually served as a Corporal and Field Training Officer.

Ray’s tenacious and bold personality made it possible for him to excel in many areas. Throughout his career, he was promoted several times and served in Patrol, Criminal Investigations, Street Crimes, and Narcotics. He was assigned to multiple Gang Task Force Investigations working with other State and Federal agencies, being recognized by the State District Courts as an expert in Gang Investigations.

As an Investigator, Ray experienced many facets of investigations and was “lead investigator” on various cases, ranging from “simple” Misdemeanor Crimes to “challenging” Capital Murders. In January of 2014, Ray was promoted to Captain of the Criminal Investigations Division where he was currently serving.

Captain Ray was very loyal and dedicated to the citizens of Orange County, the Sheriff’s Office, and to the employees of the agency. He served as the Orange County Sheriff’s Employees’ Association’s President from 2009 to 2012 and remained as a member of their Political Action Committee. Ray showed enormous support for all Law Enforcement/First Responders and took initiative when and where others wouldn’t. His perseverance and initiative took him all the way to the state level where he was a proud past member of the Board of Directors for Region 9 with the Texas Municipal Police Officer’s Association serving 32 counties in East Texas.

Tom’s presence will be greatly missed here at the Orange County Sheriff’s Office by those that depended on him professionally and by those that knew him personally.

Our deepest and heartfelt condolences go out to Tom’s wife Mariah, their two sons, Tom’s mother and father, and other members of his family. In this time of sorrow, our thoughts and prayers are with them all.