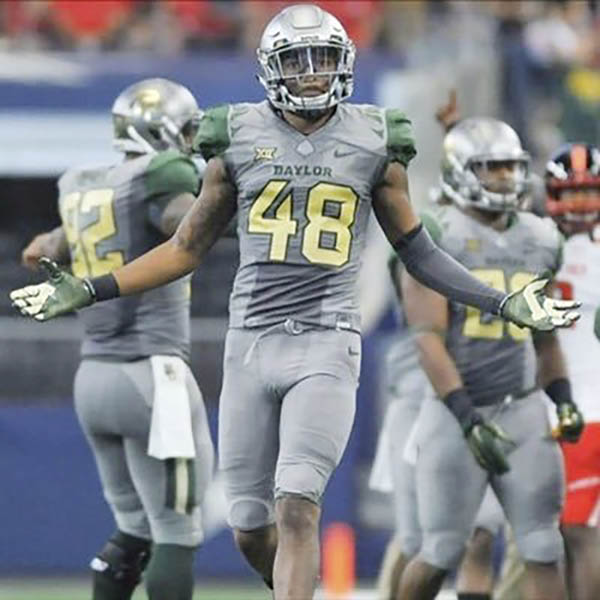 Blanchard up for Thorpe Award

West Orange-Stark graduate Travon Blanchard has definitely had a magical run for the Baylor Bears the last few seasons.

He received a big honor Monday.

The junior nickleback Blanchard was named one of 16 semifinalists for the Jim Thorpe Award, the Oklahoma Sports Hall of Fame announced.

The Thorpe Award is named after history’s greatest athlete, Jim Thorpe, and is presented annually to the nation’s best defensive back.
Blanchard has racked up 29 tackles (18 solo), 7.5 tackles for loss, 1.0 sack, one forced fumble and a fumble recovery, while starting all four games that he has played in for the Bears in 2016. Blanchard missed the season’s first two contests with an injury.

Blanchard has been an integral part in a Baylor defense that leads the Big 12 in both scoring (17.2) and total defense (320.3). With the junior’s help, the Bears also rank third nationally in team passing efficiency defense (87.61) and sixth in TFLs (8.8).

Former Bear Thomas Everett won the inaugural Jim Thorpe Award in 1986.
Three Thorpe Award finalists will be named on Nov. 21 and the winner will be announced at The Home Depot College Football Awards Show on Dec. 8 airing on ESPN. The winner of the 2016 Thorpe Award will be honored at a banquet in Oklahoma City on Feb. 7.

LITTLE CYPRESS — The Little Cypress-Mauriceville Lady Bears set themselves up for a big showdown Tuesday night after they defeated... read more