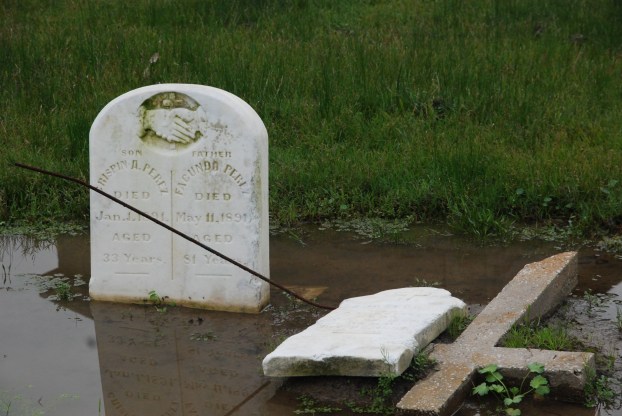 (Editor’s note: This is part two of a two part series concerning the state of Evergreen Cemetery in Orange.)

Over the last 50-plus years I have made many trips to Evergreen. My parents, grandparents, aunt and uncle and great uncle are buried on our family lot. I have friends buried there also. I have written several stories about the history of the cemetery and the people buried there. I have about a hundred pictures I have taken in the cemetery.

I often go to cemeteries around Texas and Southwest Lousiana. I have been to Glenwood Cemetery in Houston that is called the “River Oaks of the Dead”, therein lie Texas governors, movie stars, oil millionaires, and Howard Hughes. I have also been to small country cemeteries.

It is sad to say that the most unkempt, ugliest cemetery that I have seen is Evergreen. I am often in Evergreen when the “maintenance” is being done. Mowing is done with a conventional riding lawnmower. Not really of the type needed for that type of mowing. They stay far away from the headstones because the grass is usually so high that they cannot see the stones and will hit them. My father’s headstone has been “shaved” at the top by careless mowing. My great uncle’s headstone was hit and left askew by the mower. As a result of the careless mowing, the grass left around the headstones is often over a foot high. Instead of trimming the high weeds and grass, they are sprayed with a weedkiller. This is done from a golf cart pulling a tank of liquid spray. The person spraying does not get off the seat of the cart. They just spray and let the spray go where the wind carries it. The result is a wide patch of dead grass and weeds that is left to die and fall on the headstones. They are seldom, if ever, mostly never, raked off of the stones. They just lay there and rot and eventually cover the low mounted stones and build up around the bases of the larger ones. The result is an appalling mess that any worker with any pride in doing his job should be ashamed of leaving behind. Once weed killer was sprayed around the base of several large oak trees, naturally the trees died.

Grave digging is done by contractors who use a tractor and backhoe to dig the graves, regardless of how wet the ground is, or how close the grave is to other headstones. If they hit a stone, they do nothing as a general rule. They will hurriedly do the job and leave the mess for someone to clean up behind them. To them it is just a job and they may as well be burying a sewer pipe as a deceased loved one. The “cemetery manager” is usually there observing the job being done.

Subsidence of the ground has become a problem at Evergreen and old lot curbing has sunken to ground level or below, including that around the mausoleum of Lutcher Stark and his family. Large ornate monuments from the late 19th and early 20th Centuries have begun to fall apart and tumble to the ground where they are left to lie as they fell. There are some large marble and granite stones that are leaning dangerously close to falling over. Many of the smaller stones that were once just above ground level are now sunken and lying crooked half buried in the muck of dead grass and dirt.

One of the problems at Evergreen is funding, or the lack thereof. A perpetual care fund was never established. Many of the family members of those buried at Evergreen are all deceased. The cemetery at one time could depend on the cost of burial plots and grave opening and closings to pay for the upkeep. Sadly, those days are mostly gone. In addition to other cemeteries opening around Orange and the cemetery filling up, sources of income are dwindling.

Since the cemetery is privately owned, labor furnished by incarcerated inmates cannot be used to do maintenance at the cemetery. Grounds keeping at the cemetery is sporadic; when it is done it is done seated on a machine. The times I have gone to the cemetery I have seen one person doing only one thing and never doing it afoot, if it can’t be done from a seat, it will not be done. I have never seen any attempt made to do any cleaning of any graves, other than removing the dead flowers after a burial. I have personally straightened some small stones that were hit by the mower and returned to find them hit again, due to the high grass that grew between mowing and the carelessness of the person riding the mower.

Hopefully, once the depot is restored and opened and the fracas over moving or not moving city hall out of the historical district has died down and the painting of the “Cap” is done, maybe some person, somehow, will start a movement to restore Evergreen Cemetery. We owe the founders of Orange and our families no less.

By Dawn Burleigh dawn.burleigh@orangeleader.com   Selection of the next President for the United States begins on Monday. After listening to... read more