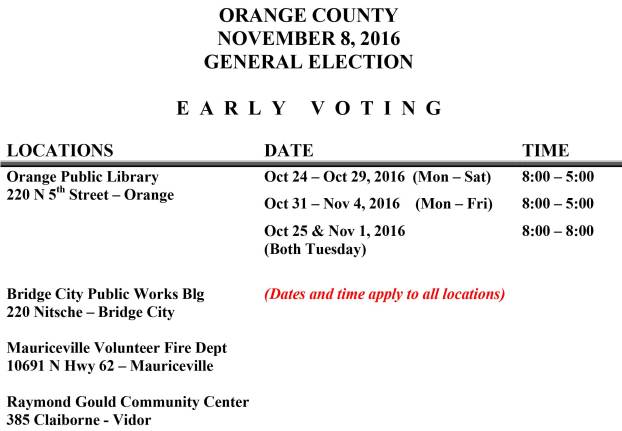 Selection of the next President for the United States begins on Monday.

After listening to the debates and doing the research, one may finally cast a vote for the candidate of their choice as early election begins.

Locally, all the choices were made during the run-off elections in May.

To vote, one has the option to cast a straight-party vote. This option will cast a vote for all nominees of one of the four parties running – Republican (REP), Democrat (DEM), Libertarian (LIB), or Green Party (GRN).

One may also vote for a write-in candidate by writing in the name and darkening the oval next to it.

One must darken the oval next to the candidate of choice to actually cast a vote.

On the federal level, one has the opportunity to vote for their choice for President and Vice President.

VOTE411 allows one to compare two candidates at a time, side by side, to help educate voters.

Sample ballots are available below or http://www.co.orange.tx.us/Elections_Information.html

(Editor’s Note: This is the first part of a series on the Shop Orange County campaign of the area chambers... read more