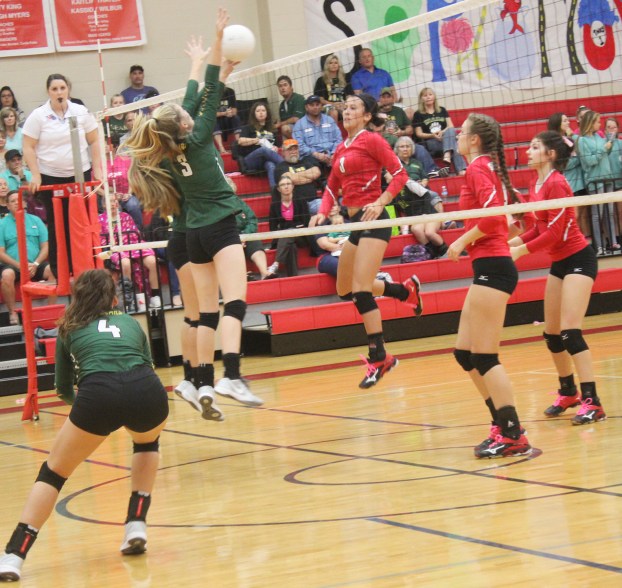 BRIDGE CITY — The Little Cypress-Mauriceville lady Bears still have their eyes on the district volleyball title as they were able to put away the pesky Bridge City Lady Cardinals 20-25, 25-20, 25-20, 25-16 at Cardinal Gym Tuesday night.

The win pushes the Lady Bears to 26-13 overall but more importantly 7-1 in district play with two matches left.

The Lady Bears remain just one game behind first-place Silsbee (8-0). The Lady Bears host Orangefield Friday and will then welcome in Silsbee next Tuesday.

The Lady Cardinals slipped to 1-7 in district but battled hard.

Bridge City actually had more kills then the Lady Bears with 56 compared to LC-M’s 37 but the young Lady Cardinals had a lot of unforced errors.

Hannah Wiegreffe had a match-high 15 kills. Rylee Oceguera and Reyna Owens had 11 apiece while Madison Caraway had 10 and Peyton Trapp added four.

Toomey, White and Hallie Stack led the Lady Bears, each racking up nine service points while Avery had seven and Raley Broussard six.

Game One was tight with LC-M holding a 20-19 edge but the Lady Cardinals reeled off six straight to take the game.

The Lady Bears broke out to a 15-8 advantage in Game Two but the Lady Cardinals bounced back to get to within 22-20 before LC-M picked up the last three points.

The Lady Bears controlled Game Three and led by as much as 20-13.

The Lady Cardinals will look to bounce back Friday when they visit WO-S.

Mustangs maintain No. 1 in Class 4A poll