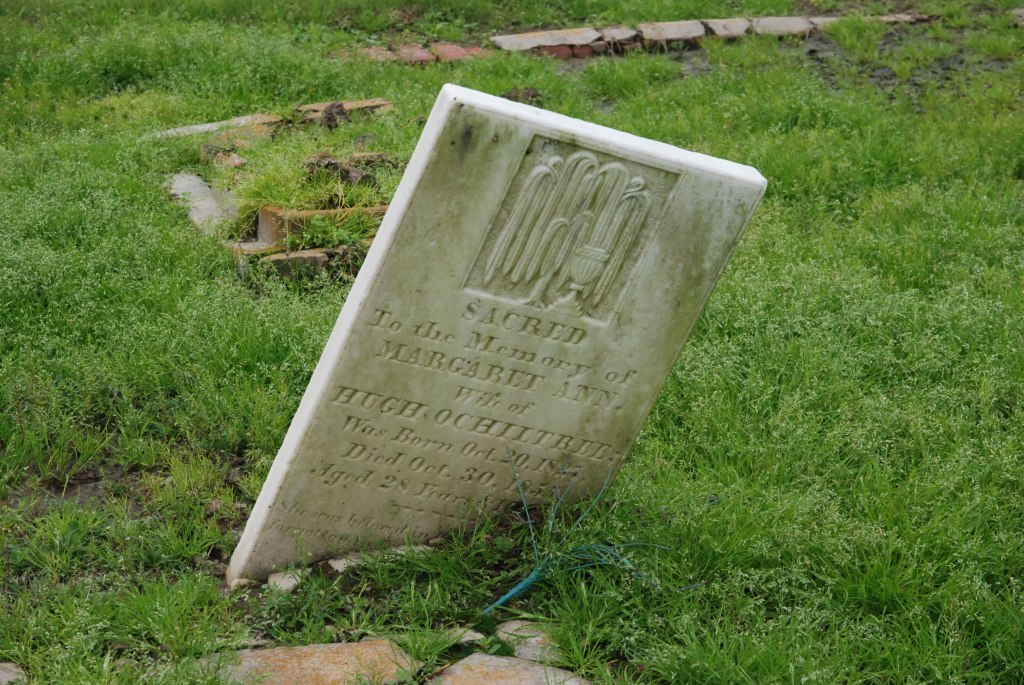 (Editor’s note: This is part one of a two part series concerning the state of Evergreen Cemetery in Orange.)

In the recent years due to the rise in the use of social media there have been numerous comments about the loss of historical buildings in Orange. There has been a modicum of excitement about the restoration of the old train depot. Most recently, there has been a minor uproar about the painting of the venerable old beer joint, the Capistrano. Overlooked in all the concern about historical sites in and around Orange is Evergreen Cemetery. Evergreen Cemetery is the final resting place of many of the early men and women who founded Orange and contributed to the growth of Orange from the early 1800s to present day.

A walk through the cemetery is a lesson in history of Orange. The earliest marked grave is that of Margaret Ann Ochiltree, the first wife of Hugh Ochiltree. She died in 1855. The Ochiltree family lot lies west of her simple grave and is notable for the high obelisk and white marble grave covers for the members of the family. North of the Ochiltree lot is the obelisk that is in the center of the Wingate family plot. David R. Wingate was the first county judge of Orange County, owned sawmills and was the patriarch of the Wingate family, some of whom still reside in Orange. The Levingston family, of shipyard fame, is buried just behind the mausoleum where Edgar W. Brown, Sr. is resting. A perusal of nearby gravestones and monuments will show the names of Swinford, Stark, Curry, Bland, Gilmer, Roberts, and many others of historical significance to Orange. These are in the older part of the cemetery, as you walk to the west you will find more names from more recent Orange history. There are veterans who fought in wars from the Texas Revolution to the current conflicts. There is a monument to seven Confederate unknown soldiers who died while encamped at Orange during the Civil War. There is a largely unknown, to the public, plot where three or four paupers are buried.

The exact number of graves in and around the cemetery is unknown. There are burials outside the cemetery boundary on the north side of Jackson Street. There were graves disturbed when Jackson Street was resurfaced and when the sewer lift station was built in the 1950s. On the south side of the cemetery behind the Brown mausoleum, is an open space where graves were once marked with wooden markers, over the years they have rotted away, leaving the graves unmarked. There could be a hundred or so graves in this area.

The history that this writer has with Evergreen is long and involved. My maternal grandfather, Charlie Mosier, was hired as the caretaker when I was about five years old. For the next 11 years he and my grandmother lived across Jackson Street from the cemetery. The first things I did there were to help lay flowers on the graves after funerals. As I grew older, I did more and more, eventually working summers mowing grass and helping dig graves. Any time I was out of school and there was a funeral, I was there. I assisted at burials in other cemeteries around Orange County also.

All of the mowing was done with large walk behind Toro lawnmowers. In the summers, when grass was growing and there were three of us mowing, we would start on the west end and by the time we had mowed to the east end, Border Street, the grass would have grown and we would go back to the west end and start all over again. If there was time, if the grass was slower growing, LaBleu and Martin would take hoes and chop grass around the headstones. My job was to take a fork and wheelbarrow and pick up the grass and take it to a pile to be burned. We tried to keep the cemetery neat. The only days when grounds keeping was not done was on the days when we would have to prepare for a funeral by digging the grave, setting up the cemetery tent and funeral equipment and closing the grave.

Graves were dug by hand then. We were respectful of the deceased and the families at the funerals. Cemetery upkeep was what is now called “labor intensive.” Those three old men and the teenage boy had the attitude that things were to be done respectfully, carefully, and done to the best of our ability.