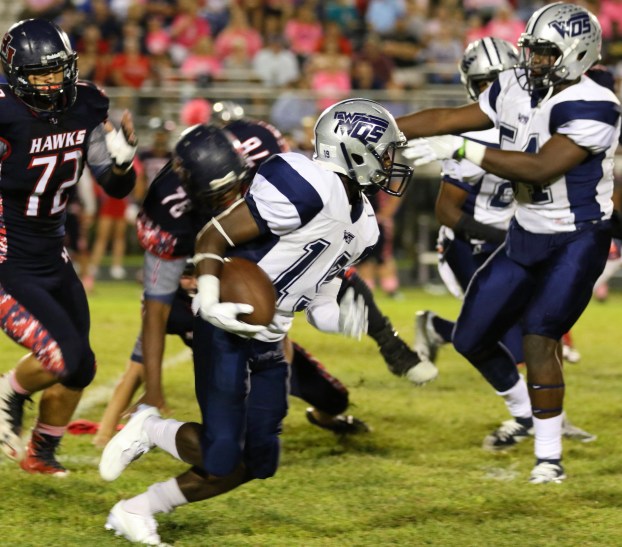 Mustangs put the hurt on the Hawks

SOUR LAKE — It was another Friday night walk in the park for the Mustangs of West Orange -Stark. They clipped the wings of the Hardin Jefferson-Hawks in their sixth shutout of the season 62-0 to remain undefeated at 8-0 on the season and more importantly 2-0 in the District 12-4A Division II standings.

The Mustangs turned on the jets early and never looked back, galloping for 412 yards of total offense with KJ Miller leading the charge totaling 122 yards with two touchdowns.

The Mustangs held the Hawks to just 27 total yards in the manhandling.

The first play from scrimmage gave the onlooking crowd exactly what they expected from the high-octane Mustang offense. Quarterback Jack Dallas dropped back behind his stout offensive line to find KJ Miller on 47-yard post to set the Mustangs up inside the redzone. Two plays later defensive lineman standout Mandel Turner -King, slammed through the middle for a two-yard touchdown run for an early 6-0 lead. The touchdown was Turner-King’s first of his career.

The Hawks (4-2, 0-1) special teams came out flying with a Cole Priddy kickoff return out to their own 48. A bevvy of blitzes forced the Hawks to fumble on the third play of their opening drive. Ronald Carter scooped up the fumble for the Mustang defense and returned it to the Hawk 24. A personal foul on the Hawks extended the ball to the 12 leaving the Mustangs just a stones throw away from the goal line.

A leaping catch by Miller on the first play following the Hawk turnover was enough to put six more points on the board for the Mustangs. Dallas threw a bullet that seemed to just stick in Miller’s hands from 12 yards out. Miller also grabbed the two-point conversion pass making the score 14-0. Dallas was 8-for-12 and 90 yards passing on the night.

A run-heavy attack by the Hawks was met early and often by the Chain Gang defense, which again forced another three-and-out on the Hawks next possession. The Mustangs took over the ball at midfield following a shank punt by the Hawks. H-J was held to just 44 yards of offense in the first half.

Through three possessions it seemed almost routine that the Mustangs would march easily down the field to score. Taking less than two minutes to notch another score with back Kavyn Cooper taking a hand-off 29 yards up the middle. WO-S led 21-0 with 3:12 remaining in the first quarter of play.

Turner-King disrupted the Hawk offense with a huge sack to open the ensuing drive. The sack seemed to set the tone for the series forcing another H-J punt to give the Mustangs the ball at their own 33.

The Hawk defense dialed up extra pressure to stop the speedy Mustang rushing attack. The added pressure put the Mustangs with a third-and-eight situation. Dallas again dropped back for his fifth pass of the game which was thrown into double coverage and intercepted by Talon Tilley for the first Mustang turnover of the game.

Mason Murray and the Hawk offense seemed to find a gap in the Mustang defense. They’d complete two consecutive passes including a 26-yard slant to Cole Priddy, who slipped behind the Mustang linebackers. The Hawk offensive line didn’t have the stamina to keep fending off the explosive Mustangs. A gang of defenders corralled the quarterback for a nine-yard loss after three positive yard plays by the Hawks to end the drive.

The two squads exchanged a pair of punts over the next several series with the Mustang offense seeming to miss their stride following several miscues. The Hawk offense however was unable to take advantage of the stalled Mustang offense.

Miller got the Mustangs rolling again taking a reverse 31 yards down inside the redzone. Dallas would find Miller two plays later for a 12-yard touchdown pass with Chad Dallas chipping in the extra point for a 28-0 Mustang lead at halftime. The Mustangs rolled up 234 yards of offense in the first half.

The Hawks offense remained stale the remainder of the game. They opened the second half with a negative five-yard drive before the punt team was ushered back onto the field. A bad snap on the punt attempt led to a 30-yard loss and gave the Mustangs the ball at the Hawk 1. Turner – King again got the call to bulldog his way into the end zone for a touchdown that essentially plucked the final feather from the Hawks as the Mustangs led 35-0 with over ten minutes remaining in the third quarter.

It was the Mustang defense coming up big again on the next Hawk offensive possession. Teshaun Teal grabbed a 33-yard interception for a touchdown as the hometown crowd began exiting the stadium with Mustangs leading 42-0. Jack Dallas finished off the third quarter with a six-yard pass to BB Tezeno for a touchdown as time expired.

WO-S head coach Cornel Thompson brought in his second team players in the fourth quarter. The younger Mustangs showed out as they continued to add to the scoreboard. Cooper plowed through the Hawk defense for two fourth quarter scores including a 46-yard run down the right side with 3:26 remaining in the game and the Mustang defense hung another zero on the scoreboard. Cooper rushed for three scores on six carries while totaling 106 yards on the ground.

The Mustangs continue to look like the number one state ranked team they are and will have next week off before hosting Liberty, which is also undefeated after defeating Hamshire-Fannett Friday night, on Oct. 28 at Hooks Stadium.