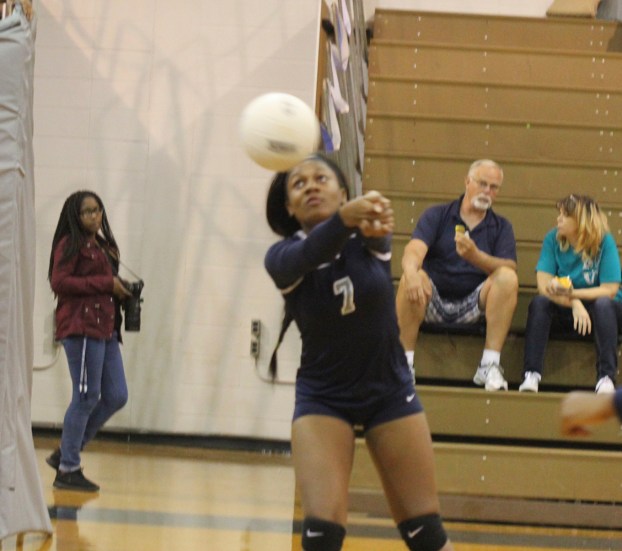 Leader Photo by Van Wade WO-S' Gabrielle Robinson looks to get back the ball over the net against Silsbee.

The win keeps the Lady Tigers undefeated in district play at 6-0 while the Lady Mustangs slipped to 2-4.

The Lady Tigers got a little feisty when they took a 24-17 lead Game Four but they simply could not put the match away.

The Lady Mustangs never-say-die attitude prevailed in the game as they rallied to score the last nine points to force a fifth and deciding game behind the hitting of Ja’Tajah Vital and Shatyra Allen.

In Game Five, the 1-2 Lady Tiger punch of Mallorie Brooks and Eranishia Carmenar proved to be too much as Silsbee ran off with eight of the match’s last 11 points to hang on for the win.

Brooks muscled her way to a whopping 22 kills to pace the Lady Tiger arsenal while Carmendar had 20 of her own.

Game One was tight as the teams were tied 19-19 but Vital and Allen led a WO-S surge, leading the Lady Mustangs to a 6-1 run to finish it.

Game Two was tight as well with the teams being tied at 17-17 but Carmenar collected five of her kills as Silsbee won that one with a 8-2 spurt.

The Lady Mustangs will look to bounce back on Friday when they visit Little Cypress-Mauriceville.

LITTLE CYPRESS — The Little Cypress-Mauriceville Lady Bears remained in second-place in the district volleyball standings by notching a 25-15,... read more