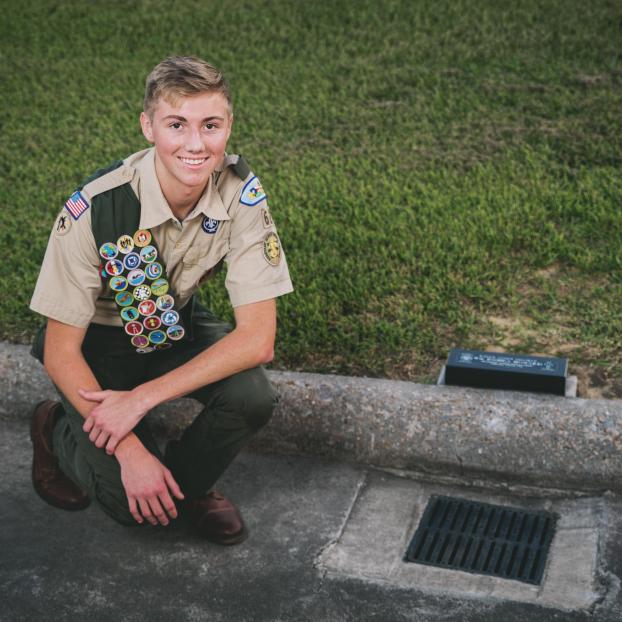 Josh Howard, a member of Boy Scouts of America Troop 62 in Orange, has earned the honor of Eagle Scout, which is the highest rank awarded by Boy Scouts of America. Less than five percent of Boy Scout members attain this prestigious honor. His Eagle Court of Honor was held at Faith United Methodist Church in Orange on October 3, 2016. Dennis Blowers is Scoutmaster for Troop 62 in Orange (Three Rivers Council, Sabine District).
Josh joined Boy Scouts at age 15 and achieved Eagle rank in two and one-half years. On his journey to Eagle, Josh earned 23 merit badges, of which 21 were required for his Eagle Scout award, and the 1-Mile Swim award. Last December Josh was induction into the Order of the Arrow (Scouting’s National Honor Society), which recognizes Scouts who best exemplify the Scout Oath and Law in their daily lives. He has enjoyed many campouts and canoe trips with his troop, while his favorite merit badges helped him become a certified lifeguard and a PADI certified SCUBA diver.
Josh’s Eagle project involved installing a drainage system at Community Church/Community Christian School to solve the flooding situation in the main entrance area of the parking lot. Under Josh’s leadership, friends and fellow scouts cut concrete holes in the driveway and installed two catch basins. A 145-foot trench was dug to lay construction-grade pipe in a Y-formation, connecting the catch basins to the State right-of-way ditch in front of the building. Now during heavy rains the water drains quickly and alleviates standing water in the driveway.
This year Josh is a senior at Community Christian School. He has maintained A Honor Roll since Kindergarten and is a member of National Honor Society. He is on the varsity cross-country and tennis teams. In addition to Scouting, Josh volunteers in the children’s department at Community Church and works during the summer at Camp Fire USA Orange Council’s Summer Day Camp as a camp counselor/lifeguard. He is the son of Steve and Ledena Howard of Orange.