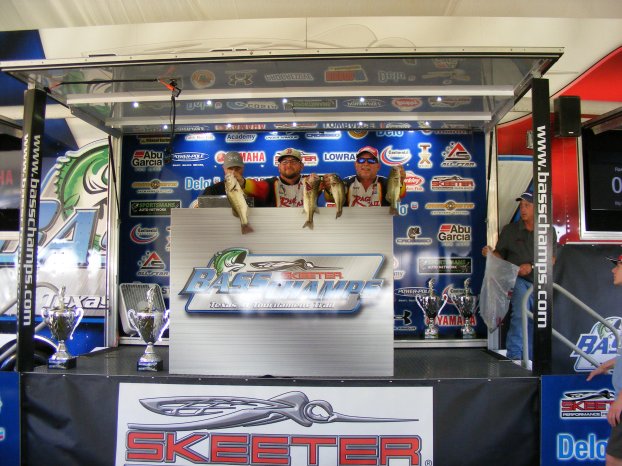 Anglers enjoyed a two-day competition Saturday and Sunday with beautiful weather and plenty of fish to catch during the Bass Champs Championship.

Father and son team, Wendell Ramsey Sr, of San Angelo, Texas and Wendell Ramsey Jr of Pflugerville, Texas were declared the winners with their total bass weigh in at 22.64 pounds. The team won the coveted Skeeter FX20/Yamaha 250.

“We have been fishing together since he was three or four years old,” Wendell Ramsey Sr. said when asked how long he and his son have fished together.

The father and son team caught 50 bass on Sunday and 60 bass on Saturday.

Wendell Ramsey, Jr. was asked about what he enjoyed most about the tournament.

“Aside from winning?” Wendell Ramsey, Jr. asked. “We have never been here before, we found fish the first few days and went back there.”

Anthony Guidry, and his son Zach, of Kaplan, Louisiana, have fished together since Zach was three years old.

This was the third year the father and son team competed in Bass Champs.

“Zach was worried about school of Friday, but said he was going with me,” Anthony added.

“I would like to do a High School Tournament,” Zach said. “But my school does not have a team.” 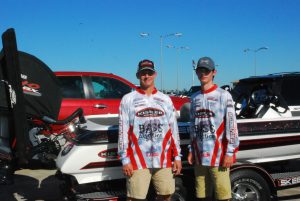 Dawn Burleigh/The Orange Leader
Anthony Guidry, left, and his son, Zach, both of Kaplan, Louisiana, enjoying their third year fishing as a team in competition. The team’s catch weighed in at 9.74 on the first day of Bass Champs in Orange.

“It is a lot of fun, we caught a lot of species of fish,” Roberson said. “It was very interesting. It was great fishing and a great community.”

Roberson said he caught the limit on the first day.

“The boat ramp and facility is first rate,” Roberson said. “This is my first time here in Orange. It is a great fishery and a great community.”

Roberson said the change in limit size helped everyone.

“The change made for a more active tournament,” Roberson said. “There would have been a lot more zeros today without the change. The chamber and leaders helped make the changes which helps make it more fun for the community and the anglers. It was a smart move on the leadership.”

“A lot more people got to weigh their fish,” Ramsey Sr. said.

Over the two day event, there were 13 zeros, where a team returned to the ramp without a catch to weigh-in.

“We hope they come back here”, said Lance Dull, of Lumberton, Texas. “It was a challenge.”

Dull and his partner, Cole Costow, of Batson, Texas, fished the Neches River because they thought they would catch the best fish there.

President of Bass Champs Chad Potts said the event was about a lot of people catching a lot of fish.

“We have a lot catching the limit,” Potts said. “Changing the minimum size was a good call.”

Anglers from as far away as New Mexico and Oklahoma registered for the event.

Greater Orange Area Chamber of Commerce Ida Schossaw said she spoke to a team from Mexico.

“They had to drive three hours just to reach the border,” Schossaw said. “They said the fish in all the tournaments.”

The team left immediately after weighing in on Sunday.

Commissioner elect John Gothia, who was instrumental in bringing the event to Orange, said there were angler teams from at least eight states.

Gothia’s son, Hunter Gothia, of Bridge City, with friend, Trey Smith III, of Orange, placed 9th in the event with a total of 21.01 pounds caught.

– Bobby Tingle contributed to this article.