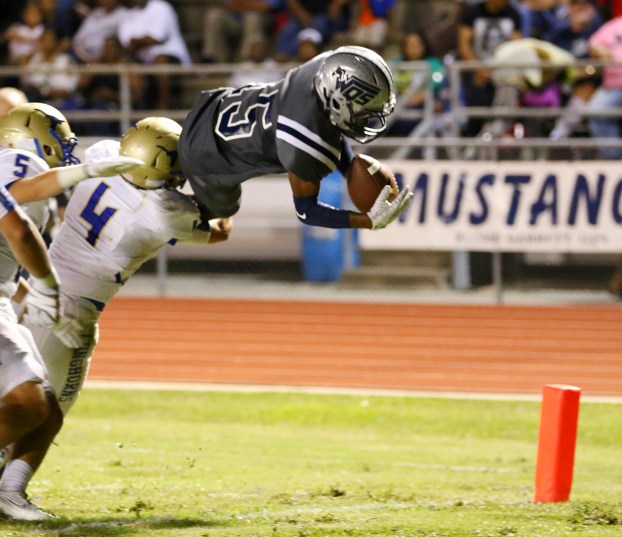 WEST ORANGE — The West Orange-Stark Mustangs took care of their business early in their District 12-4A Division II opener, putting away the Hamshire-Fannett Longhorns early, going up 62-0 at the end of the first half and crusing to a 68-0 victory.

Last season the Mustangs outscored their four district foes 169-3 and got off to a fast start Friday night.

WO-S, winners of 11 district titles in the last 12 years, have outscored opponents 367-23 this season.

The WO-S Chain Gang defense dominated the first half with two interceptions and a fumble recovery. The Longhorn offense didn’t cross the 50 the entire first half.

The Longhorns could not move the ball throughout the night, finishing with a mere 31 total yards.

WO-S quarterback Jack Dallas tossed for 70 yards in on five pass attempts in the first quarter.

Plenty of Mustangs got playing time throughout the night as they wore down the Longhorns.

The Mustangs got off to a quick start with a Kentavious Miller punt return for a touchdown from 60 yards out, after the Chad Dallas PAT the Mustangs went up 7-0 in the first 3 minutes of the game.

After the WO-S defense stood strong to force a punt, the offense took over at the Longhorn 38. Jack Dallas hit receiver Keion Hancock for 10 yards and a first down on the first play. Jeremiah Shaw capped off the short drive with a seven-yard touchdown burst putting the Mustangs up 14-0 early in the first quarter.

The Mustangs don’t stop there as they continue to pile on the points. Demorris Thibodeux picked off the Longhorns and ran it in for a touchdown from 36 yards out. That puts the Mustangs up 20-0 midway through the first quarter.

WO-S would take over again from the Longhorn 38. Dallas would connect twice through the air, the first to Miller for 22 yards. The second pass from Dallas went to Jarron Morris for 12 yards and a Mustang touchdown as Morris had a great leap into the end zone. After a successful two-point conversion the Mustangs went up 28-0 still in the first quarter.

To end the first quarter Miller returned yet another punt for a touchdown, this time from 44 yards out, pushing the score to 34-0.

The kickoff to begin the second quarter didn’t go well for the Longhorns, they fumbled the kick and Mustang kicker Chad Dallas recovered at the H-F 25. Jack Dallas passed to Dominique Tezeno for 25 yards and a first down. Tailback Kavyn Cooper ran for three yards and a touchdown to finish the drive. After a Paulino Santos PAT the Mustangs went up 41-0.

The Mustangs eventually took back over on their own 47. Cooper broke loose for a big 36-yard run and a touchdown to tack on more points in the long first half for WO-S. After the PAT the Mustangs went up 48-0 midway through the second quarter.

WO-S backup quarterback Chaka Watson took over through the air for the Mustangs with two big passes. One of them he connected with Miller for 24 yards and a touchdown to put the Mustangs up 55-0 towards the end of the first half.

The WO-S defense came up big again with a fumble recovery and touchdown by Ronald Carter to put the Mustangs up big to end the first half 62-0.

The Mustangs piled one more in the fourth quarter with a Tyshon Watkins touchdown run from 10 yards out. The PAT was no good making the score 68-0 Mustangs early in the fourth.

The Mustangs close out the first district game of the year with a solid win all around for the team. The team looks to take this good win into the rest of district play and deep into the playoff run.